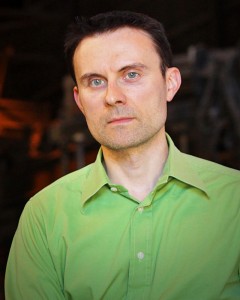 While David David Katzman was finishing his second novel, “A Greater Monster,” he was also performing a one-man improv show. Taking a single cue from the audience, he hopped around the stage playing multiple characters, an experience he now describes as “nutty.”

“The audience, I think, was supportive because they were like, ‘Wow, this kid is working without a parachute here,'” says Katzman.

The author doesn’t do improv anymore, but in many ways he’s still a one-man show. Surpassing the standard protocol of self-publishing, Katzman established his own independent press, Bedhead Books, in order to print, promote and manually distribute both of his experimental novels, “Death by Zamboni” (1999) and “A Greater Monster” (2011). (The latter is also distributed by Last Gasp, which specializes in the subversive and underground.) He launched a successful Kickstarter campaign to fund the printing of “A Greater Monster,” offering personalized, stream-of-consciousness style letters as prizes—a collection of which will be published by the Chicago Center for Literature and Photography.

I sat down with Katzman over tea and tarts to discuss self-publishing and writing the interactive, literary funhouse that is “A Greater Monster,” winner of a Gold Medal for “Outstanding Book of the Year” in the 2012 Independent Publisher Book Awards. It’s a trans-media narrative following a nihilistic ad executive after he pops a mystery pill given to him by a homeless man. The pill, similar to DMT or Salvia divinorum, according to Katzman, “shatters” the protagonist mind, slicing him through to an alternate reality. Freeform jazz was blaring in the background as we spoke—it seemed particularly fitting.

First off, why the two “Davids?”
My mother had a terrible stutter. Just kidding. I had two great-grandfathers named David, and my parents decided to name me once for each of them.

So did you have to do a lot of drugs to write “AGM”?
(Laughs) I have done a number of psychedelic drugs in my life, and I think that helped me capture the inner truth of a psychedelic experience. However, the drugs are not the point of the story. I use the psychedelic experience as a metaphor for the breaking of boundaries, breaking through barriers that separate us from our own creativity and empathy. 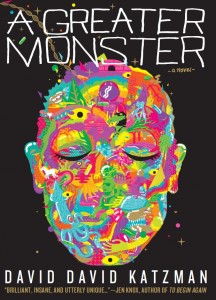 You’ve described this book as an “art object,” meaning it crosses platforms. How?
As I was writing “A Greater Monster,” I discovered a theme that emerged was about exploring changes in perspective. I think society lacks a deep empathetic perspective. The whole system colludes against expanding our sympathy. I wanted to alter the perspective of the reader, and alter what a novel is as they were reading it. So it literally alters their point of view from text to image to music and even animation.

Examples?
Well, I wanted to present the first-person point-of-view of an animal. Perhaps a video might be more accurate, but within the context of what I could pull off, illustrations seemed like a more honest way to represent a sub-linguistic point-of-view.

What’s the animal?
It’s a supersized stag beetle. It’s observing a circus performance, a dance between a human/swan ballet dancer and a thousand fireflies in darkness. I had friends who are professional dancers come over and pose in each frame that I had choreographed, and I took a snapshot. The snapshots were then the basis for my illustrator to develop the sixty-five-page sequence.

How is music used in the book?
There’s a scene where two characters are drumming with various percussion instruments. I hired Mark Messing from Mucca Pazza to help me write the music. We rehearsed, recorded and edited. In the story I subtly drop a web address. So you can read the scene and then go to the website and listen. There’s similarly another URL I hint at in a later section that leads to an animated sequence, with text animation.

Does it bother you that readers might miss the URLs?
One has to be reading closely and making connections to recognize them, but that’s the point. I think my book will only connect with people who read it attentively. It adds a new perspective for those who recognize them.

Are there any more?
Let’s see, it’s the illustrations, the graphic design, the music and the animation… damn it! Where’s the Smell-A-Vision?

I guess you could’ve done Scratch ‘n Sniff?
Oh, that would’ve been cool.

How is establishing your own publishing company different than self-publishing?
Instead of print-on-demand, which the majority of self-publishers do now (or e-book only), I did a 1,000-copy print run. I went through a bidding process and evaluated printers and paper stock. Most self-publishers do things through Microsoft Word, create a PDF and send it to someone like CreateSpace or Lulu. I ran my self-publishing like an indie press would.

Why did you take this route?
So my book could have a fighting chance to be treated like any book from a major publisher. Despite the fact that the publishing industry is collapsing and self-publishing is becoming a more respected approach, it still carries a stigma. For the most part, you can tell the difference between a book that comes from print-on-demand, and when it comes from a high-quality press.

And people do judge a book by its cover.
Not only that, but if people invest in buying a book rather than an e-book, it has to be a quality object that they appreciate holding in their hands, and that they want to keep on their shelf.

What is your advice to people who want to self-publish?
I have a lot of advice—the first piece is making the book really, really good, which means a lot of writing and revising, getting an editor, a proofreader, a designer and researching all of your options. For some, print-on-demand is great. But think about where you want to get your book carried, or if you’re content to just have it only on Amazon or as an e-book.

Any authors that directly inspired “AGM”?
It’s hard to quantify. The book’s a little bit like a lot of things, from Grant Morrison to “Alice in Wonderland.” William S. Burroughs is an inspiration, mostly because he broke so many rules, had a very individual vision, and was not commercial. I guess I am drawn to books where, in whatever genre they’re in, they somehow enlarge the possibilities of that genre.

To read in-depth about David David Katzman’s self-publishing adventures, visit his Blog of Doom. To download a sample PDF, order directly via PayPal, or see what bookstores carry “A Greater Monster,” visit DavidDavid.net/novels.