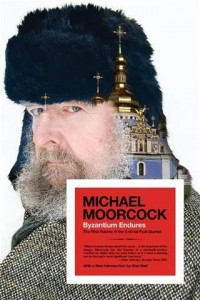 History is written by the winners, but more and more we are finding the winners to be unreliable narrators of their own victory. Nowhere in the history of the twentieth century is this more prominent than in regards to the horrors of the Holocaust. The writings of historians can give us an ever-evolving version of how, who, when and where, but they can only do so much with the question of why. In that regard, fiction is perhaps better equipped to make sense of the dark confusing turns of our past.

Enter Michael Moorcock. Known best in the United States for his series of transgressive sword-and-sorcery novels, his literary reputation in the United Kingdom was for his literary works and his new-wave speculative-fiction novels about the metatemporal harlequin Jerry Cornelius. In the early eighties, Moorock took one of the supporting characters from the Cornelius cast, one Colonel Maxim Arturovich Pyat, and began a four-volume saga of historical fiction, recently brought back into print by PM Press.

In the first volume, Pyat is a Ukrainian teenager at the time of the October Revolution with ambitious notions that he is a technological genius and the son of a brave Cossack soldier. Journeying from city to city in a shifting Eastern Europe awash in both bohemian excess and wartime devastation, he’s as unreliable as any narrator could possibly be. As he changes roles from engineering student to black marketeer and back again, Pyat is revealed as a cocaine-addicted half-Jewish naif, in almost comic contrast with his adamant racism. “Byzantium Endures” is in essence two novels, in the Swiftian tradition of satire. On one level, it is the story of Pyat’s pursuit of recognition in the mad modern world of the twentieth century. But reading between the lines, the unconscious evils of Pyat’s ignorance reveal dark truths about himself as both a character, and as an allegorical stand-in for Western civilization’s compliance with the ultimate culmination of millennia of antisemitism.

It is a comic novel, though not a comedic one, utilizing the tropes and techniques of both modern farce and classical Commedia dell’Arte. One such scene that exemplifies Moorcock’s use of comic misdirection for emotional impact is the scene mid-novel where a triumphant sexual romp reveals itself through Pyat’s obliviousness as a drug-fueled rape. For all his selfishness, ignorance and hate, there is a charismatic energy to the man that is found in all the truly terrible ideologues in history. Reflected in Pyat, we see not the man who sent millions to the gas chamber, but the millions who let him under the delusional guise of profit and progress. (Greg Baldino)

Is this a reprinting of “Byzantium Endures”? Because I remember reading it during college. Although I do agree that there are techniques of Commedia dell’Arte, and it’s the only book I can remember reading that uses that.