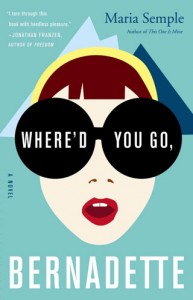 Bernadette Fox was once the biggest thing in United States architecture. Then she disappeared.

Moved to Seattle, where her husband began some hard-to-describe job at Microsoft, and her young daughter, Bee, went to private school.

Now she’s a recluse, warring with the other middle-school moms, outsourcing more and more of her most basic, day-to-day tasks to a personal assistant in India.

In the opening pages of Maria Semple’s “Where’d You Go, Bernadette,” her Pynchonian lifestyle is challenged when Bee looks to cash in on a promise her parents had made her at the start of middle school: Earn straight As, and she can have anything she wants for a graduation present. And what she wants, it turns out, is a family vacation to Antarctica.

At first, Bernadette agrees, and the family begins making preparations. But soon, her agoraphobia and untamable hatred of her fellow man get the best of her, and–once again–she disappears without a trace.

Pouring through emails, transcripts and notes, Bee attempts to find her mother, and in the process, paints a funny, vivid portrait of a woman crippled by her own brilliance.

Like her titular character, Semple did most of her work in Los Angeles before migrating north to Seattle. Semple was an Emmy-winning writer for shows that included “Mad About You” and “Arrested Development.” Traces of the latter can be found in “Bernadette,” whose characters’ defining trait is their self-centeredness, who are all part of a joke that only the reader is let in on.

Take, for example, this email from one private school parent to another: “Today at Whole Foods, a woman I didn’t even recognize recognized me and said she was looking forward to my brunch. Judging from the contents of her shopping cart—imported cheese, organic raspberries, fruit wash spray—she is the exact quality of parent we need at Galer Street. I saw her in the parking lot. She was driving a Lexus. Not a Mercedes, but close enough!”

The novel’s satire of upper-crust liberals places it firmly in a line with Jeffrey Eugenides’ “The Marriage Plot” and “Freedom” by Jonathan Franzen, who appropriately blurbs here. All are works whose characters’ conscientiousness and tolerance are revealed to be self-righteous hypocrisy.

Still, the best parts of this book for me are those that focus not on the high-minded societal issues but on the relationship between mother and daughter and husband and wife. Bernadette is such a compelling character, you want to like her, even as you realize her bitterness and lack of courage are worse than the shallow society she resents so much. (Eric Lutz)