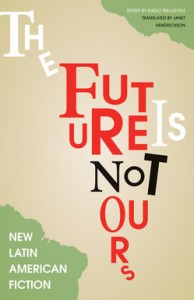 Imagine the portrait one might glean of the United States if all one read was the literature of William Faulkner, John Updike and Jack Kerouac.

For a long while, this rough analogy is how the bulk of United States readers formed their impressions of Latin America. A few literary colossi have dominated the region’s dreamscape in translation: Carlos Fuentes, Gabriel Garcia Marquez and Mario Vargas Llosa.

But Fuentes has died, Garcia Marquez is too ill to write and Vargas Llosa seems poised for his Nobel victory lap. Few believe these elders will monopolize the next decade.

A new generation of Latin American writers is emerging, with different styles and concerns. Many were born after dictators in their region fell, but before truth and reconciliation commissions began. They grew up with NAFTA, globalization and MTV.

English readers have had little access to these rarely translated figures. Three years ago, the magazine I work for put together an anthology called “The Best of Young Spanish Language Novelists.” A jury of six chose twenty-one of the strongest writers under thirty-five from around the Spanish-speaking world.

Now we also have “The Future Is Not Ours,” an anthology of twenty-three Latin American writers born between 1970 and 1980 chosen and edited by Diego Trelles Paz and ably translated by Janet Hendrickson.

As Trelles Paz, a Peruvian, describes it, the book grew organically from a digital 2007 project in Colombia. Many of the entries are good. They include some of the most exciting young voices of Latin America: the elegant Argentine short story maestros Federico Falco and Samanta Schweblin, the gritty Peruvian-American Daniel Alarcon, and his half-countryman Santiago Roncagliolo.

Skip over the anthology’s churlish introduction—which, like so many of its kind fights old battles—and go straight to the good stuff, which isn’t hard, as the first story is a cracker.

Argentine Oliverio Coelho tells of a middle-aged writer on holiday in the East who gets in above his dapper head in a tryst with a Korean woman. “He followed her through the street,” Coelho writes, “a little disconcerted. He couldn’t catch up with her, as if this phosphorescent, humid city exposed the shadow of mediocrity underlying his Argentine grace.”

The act of writing preoccupies several stories, but none of them use it as a keyhole to a character quite so effectively.

Sex is another recurring touchstone. From the hilarious machinations of couples for whom arguments are foreplay, to the sinister seethe of a city under dictatorship, many stories revolve around the body and its carnal vibrations.

In the Mexican writer Antonio Ortuno’s hilarious “Pseudoephedrine,” a couple nearly come to blows when they develop crushes on opposing homeopaths with differing opinions on how to treat their sick children.

Federico Falco’s story “Fifteen Flowers,” the collection’s masterpiece, has a darker tint. A young man reminiscences on how girls who were pregnant took their own lives in his small Argentine town. Falco’s measured tone and patience are unusual here. Many stories are so brief they could be called flash fiction. Others are mercifully brief.

In “Fish Spine,” for instance, the Brazilian writer Santiago Nazarian writes of a Japanese market stall worker as if he were an alien from Mars. Andrea Jeftanovic’s story revolves around a cheap and disturbing imagination of incest.

It seems a shame that such stories weren’t dropped for work from more talented Brazilians, like Michel Laub or Daniel Galera, or the fiction of Argentines Pola Oloixarac or Lucia Puenzo.

And yet, for every two or three foul tips, “The Future Is Not Ours” introduces a writer worth watching. As in baseball, this is a fine hit-rate indeed.

In an elliptical and beautiful story, Dominican writer Ariadna Vasquez captures the feeling of being stuck on an island and imprisoned by beauty. And the Guatemalan Ronald Flores’ “Any Old Story” conjures a woman from the provinces who comes to work in a factory and loses everything.

The collection’s title suggests an anthology preoccupied with the disenfranchised, but that’s not the case. Even if a lot of Latin America is, indeed, poor, there are wealthy kids in these stories and impoverished ones, too.

Happily, “The Future Is Not Ours” proves itself to be false advertising on literary accounts as well. Duds aside, here are talents to whom the future rightly belongs. And now we have even less of an excuse not to have read them. (John Freeman)

“The Future Is Not Ours: New Latin American Fiction”
Edited by Diego Trelles Paz and translated by Janet Hendrickson
Open Letter, 254 pages, $16