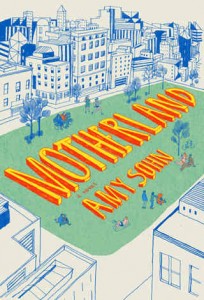 Social satirist/Brooklyn mean girl Amy Sohn has returned to her cast of bougie Brownstone-dwellers with “Motherland, ” the not-quite-sequel (companion?) to her 2009 best-seller “Prospect Park West.” Sohn, a former New York magazine dating-columnist and television writer, has since settled down to assume her place as crier of the Brooklyn stroller-set: if there is anyone who catalogues #whitepeopleproblems with more bubble-gum vitriol, send them my way.

Or maybe don’t, because, as addictive as it is to read about nightmare versions of one’s future self, there has to be some potential reward for the nausea. And here, at least, while there’s plenty of fun and a lot of good writing—say what you will about Sohn, the quality of prose isn’t her problem—the results are ultimately hollow. Fun and hollow, sharp and hollow, smart and hollow, but hollow nonetheless.

“Motherland” picks up with Rebecca (of “Prospect Park West” fame). She’s hardened and wry and destined to eventually be played by Cynthia Nixon. Also, she’s married to Theo, who is, we are continually reminded, smart and great and a very good father. The irony of which is continually highlighted, because—unbeknownst to him—he’s not the father of the couple’s second child. That honor belongs to Stuart Ashby, an Aussie Hollywood hotshot who, before he was on the up and up, was married to then-starlet Melora Leigh, who’s now on the down and down.

Up the street, Rebecca’s best friend, Marco, has suddenly—and mostly unwillingly—become the father to a second adopted son, thanks to his baby-crazed (though not baby care crazed) husband, Todd. The gap between the couple is growing to chasmic proportions, and—in part because it rings true, and in part because Amy Sohn uses adultery the way other writers use semicolons—the pair retreat from each other and into a series of sordid and generally joyless sexual romps facilitated by an iPhone app.

And the list goes on: Rebecca’s other BFF, CC, who is tall and Asian and apparently pleasingly sarcastic, though otherwise in possession of no notable traits, is married to Gottlieb, a nerdy Princetonian turned cool screenwriter. Karen, a recently single mother whose husband has just left her for a transvestite maybe-prostitute, and who is infinitely more fun to read about than her thinner and less-frazzled peers, is busy channeling her inner Stella and gettin’ her groove back. Helene, a pre-gentrification Park Slope native, is busy enacting her rage on the changing neighborhood by stealing fancy strollers from playgrounds in a gesture which is clever and poetic, but which adds up to very little.

In other words, there’s a lot happening.

The characters—broad and prime for television adaptation—begin as narcissistic stereotypes, the punchline to Brooklyn gentrification jokes, and then heighten to soap-operatic proportions. Everyone is involved with everyone else, usually sexually, but sometimes as smoking buddies, writing partners and, in more than one case, via some kind of paternity crisis.

Over and over in interviews, Sohn’s said that her complaint with Park Slope parent culture is the dishonesty of it: everyone is talking with faux-moralism about the evils of ice-cream trucks near playgrounds (how dare they?!), before excusing themselves to pop benzos in the Mommy and Me bathroom. Bugaboos and summerhouses aren’t working their magic on everyone, Sohn has said, most notably in an annoyingly baiting essay for the online magazine The Awl about Brooklyn mothers smoking and drinking and sleeping their way through middle age. Some significant portion of the mothers who brunch are unhappy, she says, and no one is talking about it. And with “Motherland,” Amy Sohn is going to talk about it.

Except that, for all of its apparent messiness—faded ambition, free-floating dissatisfaction, the horrors of impending middle age—Sohn writes about Brownstone Brooklyn’s vices with an insular tidiness generally reserved for telenovelas and the movie “Crash.” The story lines twist together at an increasingly alarming rate, and as they do, they steamroll any emotional nuance.

But once the game is in play, Motherland collapses under the weight of the increasingly cartoonish plot. Sohn’s cutting observations and razor precision give way to broad outrageousness—depressive, often, and usually self-destructive, but unmoored from the fundamental emotional resonance of the novel’s first half. As the external world gets endlessly more complicated, the characters’ interior lives simplify. And one wishes they wouldn’t.

It’s a satire, sure, and Sohn’s not pretending (or aiming) to be Alice Munro. But 341 pages is a long time to sustain so much archness with so little meat underneath. (Rachel Sugar)