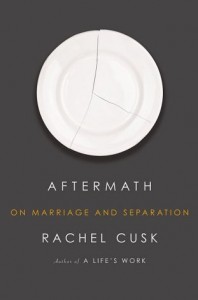 Fans of British writer Rachel Cusk’s seven novels or her lacerating memoir of new motherhood, “A Life’s Work, ” will be saddened by the painful revelations about her divorce and its effects upon her young daughters, but they will hardly be surprised by the unflinching gaze on display in “Aftermath: On Marriage and Separation.” This spare, eloquent memoir draws on ancient Greek drama to compare what Cusk perceives in herself and her children, as if only the murderous strife of Agamemnon and Clytemnestra can adequately portray what it is like when a family fractures. Cusk’s restless, ranging intellect—“I don’t ever want you to tell me that I think too much,” she warns her psychoanalyst in their first meeting, “if you say that I’ll leave”—pulls in example after example from the literature of great human tragedy, interweaving the high canon with small, heartbreaking details about life after marriage. When her daughter is shunned by new friends, Cusk’s protective fury can’t fully comfort her betrayed daughter, who now sees the world in a radically altered way: “They probably didn’t even realize, she sighs, looking out of the window into darkness. They probably didn’t even think about it. That’s just what people are like.”

Significant omissions include the reasons for their split; Cusk tells us that her husband believes she has treated him “monstrously,” but she never explains what behavior might have led to that striking descriptor. Nor does she offer many details about what led to their final split, or what kinds of fault might be found in her actions, or his. Maybe it’s prurient for the reader to want to know. Or maybe that isn’t the intent of this at-times maddeningly elliptical book about aftermath. “I talk a lot with Y about X but increasingly I find I am reluctant to mention Z,” Cusk writes, challenging us to accept the interior force of vagueness in lieu of specifics. More persuasive, and more controversial, are the sections where her assumptions of equality are laid bare by laws that will oblige Cusk to support her husband financially, as well as the fraught and primal “flesh history” with her daughters that make her claim in an agonized phone call—against all expectations she might have had for such a moment—“they’re my children. They belong with me.”

Rachel Cusk is a writer utterly unafraid to examine despair, but she does so with wit and humility and humor. The last section of the book shifts perspective to a surprising point of view on her newly “post-familial household;” it’s a narrative risk that pays off in a compelling story as well as in the understanding of how love’s end appears to outsiders. It’s a sign that the ability to imagine life as another—the reason for literature—will sustain Cusk, and others, when all else seems to fail. (Emily Gray Tedrowe)