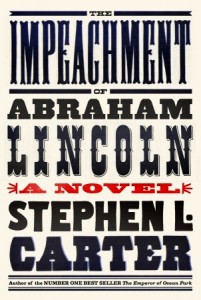 Instead of an East Room shrouded in black lace, instead of flocks of mourners lining the railroads, instead of imperishable verse from Walt Whitman, the novelist Stephen L. Carter presents Illinois’ most mythologized resident—a man whose leathery, careworn face we are most used to etched into marble or increasingly worthless zinc—slammed with criminal charges. Abraham Lincoln survives John Wilkes Booth’s bullet only to be set upon by Congress.

In his new book, straightforwardly entitled “ The Impeachment of Abraham Lincoln,” Carter takes us back to 1867 and asks whether Lincoln’s conduct during the Civil War could have, sans martyrdom, been legally assailed by the same forces that came within a single vote of constitutionally kicking his successor Andrew Johnson to the curb.

In 2002, with the launch of his first foray into fiction, “The Emperor of Ocean Park,” Stephen L. Carter quickly became known as a rare sort of man who in addition to producing reams of writing in his capacity as a Yale Law Professor and national news columnist could also be counted upon to churn out urbane legal thrillers. But he is perhaps best recognized as a chronicler of upper-middle-class black America. With his choice of heroine in this novel, an aspiring lawyer named Abigail Canner, Carter reminds us that reconstruction-era Washington D.C. was home not just to newly unshackled slaves, but to African-Americans that had been free and economically successful for generations. Abigail is a daughter of this upwardly-mobile (successful) strata and has been brought up to believe that if she works hard enough, race is not an insuperable barrier. This is a tall order in 1867, when there were only a handful of black lawyers in the country and no women of color practicing law.

But Abigail has beauty, brains and a degree from Oberlin (which was already dispensing twenty-first-century feminism like nineteenth-century hotcakes) and so can presumably take whatever scheming senators and vengeful confederates throw at her.

Congress is plotting against the President. A band of “Radical Republicans” (as dissimilar as possible to our modern variant) is hell-bent on punishing Lincoln for being lax on the South and for disregarding civil liberties throughout the war. They are desperate to oust Lincoln through legal means (though murderous thugs do appear with thrilling regularity) and Abigail must channel her inner Sherlock in between scouring law texts to find the traitor lurking in Lincoln’s midst. All the while, Abigail contends with constant abuse for her race, sex and spunk while her beauty dazzles all the wealthy young Yankees not interred at Antietam.

All this is rather entertaining. Though the frequency with which Abigail’s often-prejudiced interlocutors spout lines like “The reason I spent time with you is because you are the most fascinating woman in Washington City” make us start to doubt it.

Carter (as evidenced by his previous, compelling work) knows how to craft a gripping thriller. But in this case the layers of subterfuge seem to have been added as an afterthought. The reader quickly tires of each sanguinary plot twist, presumed poisoning, and forced moments of sexual tension and lives for the legal maneuvering. This is a unique book. In a bizarre inversion of HBO’s business model, you come for the cliffhangers, blood and brothels and stay for the profound political and moral quandaries.

Lincoln’s laundry list of legally questionable actions has been scrubbed from our collective consciousness and Carter is right to remind his audience of them. Honest Abe suspended habeas corpus, countenanced deplorable POW camps, jailed journalists, shuttered presses, had people arrested for speaking out against the war, and placed free northern cities under martial law. As Carter puts it in an evenhanded author’s note, however much we must admire Lincoln “no modern chief executive, no matter how controversial, had such a litany [of possible constitutional violations] to his credit.” When he thought the Maryland legislature might vote with the South on secession, Lincoln just sent the boys in blue and their bayonets over to indefinitely shut it down. Government of the people, by the people could wait.

This account of the legal proceedings, though it may not be as salacious and salable as our modern experiments with the practice of presidential removal, make scanning Carter’s yarn compulsory. The central charge leveled against the Great Emancipator by the radicals in the novel, counterintuitively, is that he does not do enough to secure rights for African-Americans still languishing in the South. Many abolitionists along the lines of Thaddeus Stevens thought of Lincoln as a latecomer to the cause. Fredrick Douglass’ many rhetorical fusillades against Lincoln’s plodding journey on the road to outright abolitionism obviously have the most staying power here. But, in Carter’s retelling, it is an African-American woman who works hardest, sleuthing night and day to defend the man whose steadiness and imperfections won a victory that the righteous preachers from New England could not. Abigail’s effort vindicates Lincoln even as senators bloviate and indict him. Carter’s book at the very least reminds us that a craven, obstructionist congress is hardly a modern invention.

Carter’s excursions into the lives of other great nineteenth-century personalities can’t help but enthrall. We become reacquainted with larger-than-life historical figures who wouldn’t withstand five minutes of a twenty-four-hour news cycle. The terror of the South, William Tecumseh Sherman, is cross-examined on the witness stand. General Daniel Sickles, the war hero known to have shot his wife’s lover to death in broad daylight, acts as Lincoln’s wiliest attorney. And banker August Belmont makes for a more conniving plutocrat than both of the Koch brothers put together, telling the President of the United States to tackle certain tariffs or, at trial, face all the influence that money can buy.

Carter stresses that the book is meant as entertainment and not a political brief of any sort, but it is tough to mentally detach this fiction from its factual predecessor in Carter’s canon “The Violence of Peace: America’s Wars in the Age of Obama.” Obama is known, and has advertised himself, as a Lincoln buff. In 2008, there was not a late-night comic’s couch to which the sublime Doris Kearns Goodwin did not trot to belabor the comparison. He hails from the same state, and has surrounded himself with a rival and her husband’s team (although he does manage to get her carted off to Eritrea with a frequency Lincoln can only have dreamt of in the 1860s.) But Obama also faces the same legal bane during his time in the capital. Are there any real lengths to which a President cannot go for the sake of national security?

So far when faced with a choice between sparing Americans from the threat of violence or preserving civil liberties Obama, like Lincoln, has consistently chosen the former. Guantanamo Bay remains open, the rendition of terror suspects continues apace (though Egypt is no longer quite as pliant on this point), and drone strikes continue to execute American citizens abroad without so much as a hearing. Dealing with existential threats, whether in Antietam or Afghanistan, has prompted chiefs to veer into illegality. Obama’s offences are not nearly on a Lincoln-esque scale, but as of yet neither are his achievements. (Christopher Riehle)