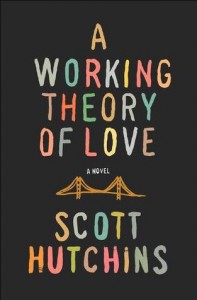 “A Working Theory of Love” opens with a supposedly self-sufficient old man carried from his apartment by paramedics. Flailing at walls and banisters in attempts to stop his descent, “I’m sorry, Neill,” he tells the narrator, a newly divorced bachelor who lives below.

Self-sufficiency, Neill fears then, is just a positive spin on surviving alone. Neill knows something about loneliness, perhaps more than your average San Francisco transplant. Hired by Amiante Systems to help train a sophisticated computer program to pass as human, Neill’s job is colored by his father’s suicide. The computer, dubbed Dr. Bassett after Neill’s father, uses twenty years of Neill Bassett Senior’s diaries as personality fodder. Neill’s boss (arguably the only self-sufficient single in the book) is determined that the computer pass the Turing Test, a sort of Gold Standard for denoting artificial intelligence, so Neill spends his days engaging in simple Q and As with the facsimile of a father whose mechanical essence evokes the same incomprehensibility Dr. Bassett evinced in life.

Nights, Neill wanders a beautifully articulated San Francisco, a city bustling with “single people beached in life.” His rambling leads him to a youth hostel where he meets Rachel, another displaced soul who grows in importance as the book progresses. From there, Neill’s personal life becomes an embodiment of operationalism, the idea upon which the Dr. Bassett Project hinges. In essence, if he can emulate meaning, then his life will become meaningful. To this end, Neill rejects Rachel in favor of a practical computer programmer working for Neill’s boss’ rival, then dips into nostalgia as he continues to meet up with his ex-wife. All the while, Dr. Bassett slouches toward sentience, eventually forcing Neill to prod at family mysteries perhaps better left undisturbed.

As a debut, Scott Hutchins’ novel succeeds. While the artificial-intelligence conceit feels utterly unique in this literary fiction context, Neill himself is universal in his specificity, his glacially slow emotional evolution both frustrating yet strangely relatable. Though some characters are rendered more fully than others, all are astutely delineated. Hutchins has a flair for highlighting the deceptively tiny fragments which somehow contain a character’s whole. For example, a friend of Rachel’s, dancing at a club, is described as gyrating “reluctantly, as if someone talked her into it.” Nothing life-altering, still a telling moment snatched from the ether and held up for the reader’s examination.

Hutchins’ true triumph, however, lies within his novel’s convergence of language and pacing. The story he’s chosen to tell, despite flirting with the fantastical, reveals no outrageous twists, nor dramatic revelations, yet he steadily builds tension through his linguistic choices. In other words, life’s realistic detours are described in such a way as to heighten their relevance; a failed marriage’s quotidian traumas are revealed with slow purpose, small pauses are used to oversize effect. In this modern tale of life’s scattered attachments, of an individual’s journey toward the self-sufficiency only a curated collection of wise entanglements can provide, even small revelations echo. (Sarah Terez Rosenblum)