The landscape for bookstores over the past few years has seen a drastic shift away from business-focused large-scale retail. Since the closing of the Borders books chain and the commoditization of online books from vendors like Amazon, the independent bookstore has been elevated to a level of predominance in the local market, giving customers a much needed outlet for physical sales, and the chance to hold a book and flip through its pages before buying. Independent music stores lived through a similar experience when chains like Virgin and Tower Records closed. These changes might have something to do with the fact that in less than two years’ time, three new booksellers have opened in a less than two-mile stretch along Milwaukee Avenue in Logan Square. The two Blue line stops and the 56 Milwaukee bus make this a prime location for their literary expansion.

The sense of community in Logan Square is strong: from the successful farmer’s market, to the efforts of Logan Square 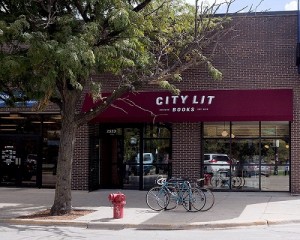 Preservation, which manages the Comfort Station community space. For Teresa Kirschbraun, owner of City Lit Books, which opened in August, her choice to set up shop in Logan Square was in line with a “buy local” mentality. “I have lived in Logan Square for twenty-five years,” says Kirschbraun. “When I made the decision to pursue opening a bookstore, I wanted it to be in my community.” A similar idea was established two years previously when Marc Ruvolo opened Bucket O’Blood Books and Records. Ruvolo has been a resident of the area off-and-on for the past eighteen years. “Everyone around here is super nice and supportive. It’s a great area,” he says. “I love books and all I’ve done is try to sell good, quality books for cheap while fostering some sort of community feeling.” Both banked on support from the neighborhood they knew well as their ventures entered an era of operation out from under the shadow of chain stores. “Borders closing has actually been positive for us,” says Kirschbraun. “Their customers are still looking for a bookstore and many customers tell us they come here for that specific reason.”

The third new bookstore in the burgeoning Logan Square literary landscape is Uncharted Books. Ramona the dog wags her tail to welcome patrons into their casual, relaxing setting. Like its neighboring booksellers, Uncharted offers a 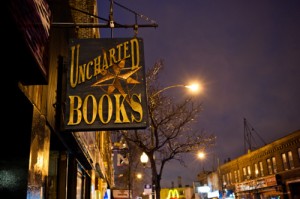 community space for events like readings and meet-ups. City Lit’s Kirschbraun echoes that sentiment, “I wanted to create a community around love of the written word. That is happening daily through conversations with customers. I wanted to have a great place for children and families to come and pass on that love of books and a great bookstore.”

City Lit often sends patrons to their neighbors if there is a title they do not have. Bucket O’Blood, being more specialized in horror and fantasy genres, doesn’t get much opportunity to do the same. But even with a saturated neighborhood market, all stores have been successful in keeping their doors open. For a customer looking for a good read, all they need to do is travel from California to Kedzie northwest on Milwaukee to visit all three stores.

In a challenging era for booksellers combating the onset of online book distributors and ebook devices, these local stores offer a tangible product to a ready and receptive community. For these three outlets, having smaller locations, lower overhead and the opportunity to offer one-on-one customer interaction gives them an edge over still-active chain stores like Barnes and Noble. These indie booksellers are not shaken. “The book, as an idea, is so entrenched in our collective psyche that I think it will take quite a long time for stores like mine to disappear completely,” says Ruvolo. “I think that there will always be the curious, the fringe, the contemplative individuals out there who desire knowledge, whether it’s from books or any other shareable medium.”