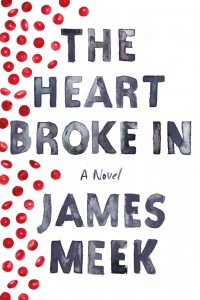 James Meek’s novel, “The Heart Broke In, ” largely centers around men and their fathers. Motivated by Daddy Issues and a great, masculine desire to reproduce oneself, Meek’s characters suffer a range of human follies.  Their betrayals are both epic and pathetic, calling to question what lengths people are willing to go to preserve the self.

Richard Shepherd is an aging rockstar desperately holding on to his former fame and celebrity by producing a reality show and sleeping with young women. Richard is an almost entirely unsympathetic character, who cheats on his wife, lies to his kids, and even tries to put his mother and sister in the position of meeting his father’s murderer. The sister, Bec, is a saintly viral scientist who has found a cure for a type of malaria. She turned down a marriage proposal from a maniacal newspaper owner, who in turn blackmails her brother for information on her. Richard’s got to decide whether he would betray his sister to save his own skin. This bit might have been more dramatic if there was any doubt about Richard’s moral compass—it seems fairly obvious from the very beginning that he would do exactly that. After breaking up with the newsman, Bec begins a quick and unlikely romance with Alex, an unsocialized mathematician. Alex’s uncle Harry, also a scientist, has treated him like a son all his life, rejecting his own son for real or perceived deficiencies of mind and character. Harry, now dying, continues his cruel-Daddy machinations, adding to the turmoil of this jumble of musicians and scientists.  He makes declarations like, “Personally I reckon Darwin would have given IVF the thumbs-up. If you start saying people have to conceive naturally, where does it lead you? The human race pretty much told evolution where to shove it when we invited the barbecue” and tries to convince his religious son’s children that God doesn’t exist. When Alex and Bec have trouble conceiving a child, Alex becomes more and more consumed by the idea—motivated by the thought, no matter how unhealthy, of his relationship with Harry and simple evolutionary biology. “Getting together with another eukaryote and replacing yourselves, that’s the only way to live forever.”  For all the focus on reproduction, none of the characters, particularly the fathers, seems to have good relationships with their children.

Between Meek’s idiotic blackmail scheme and thematic obsession with cells reproducing, the story suffers from a lack of focus. Meek’s writing is confident and elegant, but his dialogue has a tendency to be on-the-nose and obvious. There are so many plot-lines running in this 416-page book one wishes he’d just chosen a small handful of characters and cut out half a dozen unnecessary dramas.  Thrown into the mix is a side trip to Tanzania and even something of a murder mystery of Richard and Bec’s dad, killed in the conflict with Northern Ireland. There are sections, among this messy, sprawling story, that display a real artistry of storytelling, like when Bec and her dad hunt a heron at night. A still moment, followed by violence and surprise. Brother and sister remember the night differently—the truth is somewhere in between. (Kelly Roark)