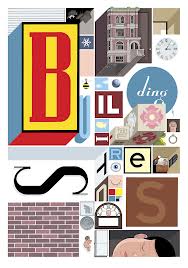 Chris Ware’s “Building Stories” is a literal and figurative odd fit for the graphic novel section. Arriving not in the form of a bound volume, but instead in a matte-textured box containing “14 distinctively discrete books, booklets, magazines, newspapers, and pamphlets”—all working in concert to tell stories of the tenants of a three-story apartment building in Chicago, it takes Ware’s approach to visual storytelling to a new level of game-changing.

The title is appropriate. In a way Ware’s works have always been “building” stories. The architectural precision, not only in his design of spaces but the layout of the very page, has always been the most recognizable aspect of his style. Here he makes the format fit the form, as these stories would play havoc with the constraints of a uniform, ordered volume. In the physically and chronologically smallest ephemeral narrative, one of the tenants storms out under-dressed into the snow, angry at her life. The episode itself takes place on a strip of paper a mere three inches wide and two feet long. The same character reappears in a newspaper-sized bundle later in her life: different times, different problems. In yet another form, this time a zine-like minicomic follows the tragicomic domestic exploits of a bee who can be found flying in, around, and out of the central building. One of Ware’s skills has always been playing with the spatial dimensions of images, playing out the fragments of tiny thumbnail-sized panels against broad panoramas of time and geography. 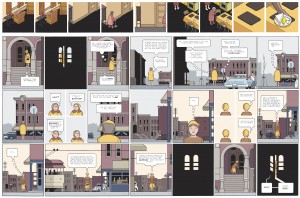 This play has always been present in Ware’s work, even in his early pre-Chicago work for the University of Texas at Austin’s student newspaper. Those early stories showed his familiarity with and appreciation for the conventions and exercises of the early comics and animation. His Quimby the Mouse and Sparky the Cat stories read like if Anton Chekhov had produced funny animal cartoons, while his breakout novel “Jimmy Corrigan: the Smartest Kid on Earth” hearkens back to the work of funny-page pioneers Winsor McCay and George Herriman. Originally coming to Chicago to study at the Art Institute, he would ultimately drop out citing dissatisfaction with the approach of his instructors and an atmosphere that at the time was apprehensive and dismissive of comics as a valid art form. Persisting in his passions, Ware became an amateur scholar of classic comics, and found a pivotal influence from one of his future contemporaries: “I discovered the hardcover reproductions of Robert Crumb’s sketchbooks in 1987,” he said in the introduction to his own sketch collection, “The Acme Novelty Date Book,” “and I was, as the kids say completely ‘blown away’… the books practically exuded life to me, unlike most of the ‘art’ which I was being introduced to in school…” His own cartoons began to find an audience through comic and illustration work appearing in the early pages and covers of Newcity before being collected. 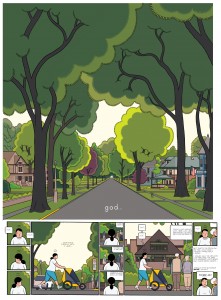 “Building Stories” then is in many ways a microcosm of Ware’s thematic personal imprint, Acme Novelty Library, reflecting both his design sensibilities and the stories and characters that concern him. Often stereotyped as cold and melancholic, as though he crafted nothing but illustrated suicide notes, his stories encompass a wide range of emotion and experience. The pamphlet “Branford the Best Bee in the World,” for example, takes the titular character through a remarkably insightful odyssey of doubt, gender issues, sexual infidelity and religious guilt—all while remaining relatively consistent with the actual biology and sociology of bees. And there is a moment in this story where Branford, grappling with fantasies of infidelity and fears of supporting his family in the middle of a food shortage, drops to his knees and prays to God. Glancing through a window he (and the reader) are given a sight of a crescent moon hanging over the city skyline, while the light of dozens of fireflies illuminates a rainbow of flower blossoms. It’s one of those astonishing moments of beauty that come through the precision of Ware’s design. Those are the moments where the architectural influence on Ware’s work really becomes realized. Just as the French architect Le Corbusier described a house as “a machine for living (in),” so too are the samizdats in “Building Stories” machines for reading. The mathematical elements of the design and layout, coupled with iconographic forms, make the reader a formal collaborator in the work, drawing us in to let us be the ones to realize this is life, and someday all of this will be gone. Chris Ware’s stories are the sheet music that we read to hear music in our hearts.