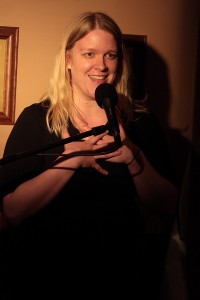 For ten years the 2nd Story Collective has been telling tales before Chicago audiences. Now celebrating their first decade, the group has published an anthology of some of the best writing performed in the group’s history, with the surprisingly rhythmic title “Briefly Knocked Unconscious by a Low-Flying Duck,” published by Elephant Rock Books. 2nd Story’s literary director and author Megan Stielstra spared a few minutes to talk about the group and their new book, which she co-edited with director of publishing Andrew Reilly.

What is 2nd Story?
We are a collective of storymakers. There are twenty-five people in our company, but we collaborate with other artists throughout the city; that can mean writers, performers, directors, graphic designers—people who love stories and are trying to figure out the best way to give that to the public. Typically we do live performance events; we do four or five a month at various locations. We’ve done shows at Webster’s Wine Bar in Lincoln Park, Underground Wonder Bar downtown; we also have partnerships with the Steppenwolf Theatre and the Goodman and different collaborations with different theater companies. So we’re very fortunate to get to work in all these different places, but it’s always with the mission of sharing stories. When you come to one of our shows you’re going to hear three or four stories from a diverse variety of tellers—and that can mean age diversity, or gender, or orientation, or life experience. (I think our youngest teller is fifteen and our oldest is in their early seventies.)

So it’s a pretty mixed bunch then.
We kind of bounce around a lot with people who’ve lived really amazing lives and want to share them. Our mission is we support them in the telling of their stories. A lot of the people on our staff are writers and editors who work with getting the story on the page. Then we have theater teachers and performers who help them get those stories off the pages. We’ve been doing this for about a decade, so we’ve had all kinds of stories, and we wanted to be able to put them on the page so that our reading audience can enjoy them in the same way that our live audience has.

What were the challenges in adapting these stories for the page?
Many of the stories were performed before we had live recordings and podcasts, to hear and to listen to the performances out loud, it was exciting.

In our live performances all of our storytellers work with sound designers, whether they’re DJs or live bands, depending on the venue. Music is there to create a certain tone; often the music will allow you to move from scene to scene or have an understanding of when you’re in backstory or fore-movement of the story. But there’s also just the performance of the storyteller’s voice. As we were looking at all these stories on the page, we had to make sure that all of those changes of voice—the pauses, the differences of tones, the things that the music brought to the performance—how can we rewrite and adapt that for the text?

2nd Story is a pretty big operation. Who was involved with the making of the book?
I served as co-editor with Andrew Reilly, our director of publishing. We were really lucky. It was a really fascinating and challenging process; I was fortunate enough to work with many of the writers early on in the process when they were writing this for performance. It was tricky for me when I was working with the pieces on the page to not hear those voices, so it ended up being a very collaborative process between different editors, people within our organization who’d never heard the pieces performed aloud. Our main editor Jotham Burrello served as an amazing outside eye, someone who could come back and say “What did this storyteller mean with this part here?” and I’d say “What do you mean, it’s totally there, it—oh, it isn’t!” because in my head I could hear what they were doing but someone who hadn’t seen that live performance couldn’t. It was a real back-and-forth process, and luckily all twenty-three writers who were involved with the book were totally game for that. So I feel really grateful. This was a work of many, many people. 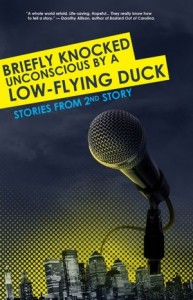 On the subject of work, what was the actual process of making the stories work as text like?
We start with sitting around a table and hanging out with the team, and just telling stories out loud. The same way that when you go out with your friends to a wine bar and you split a bottle of wine and you share stories back and forth; that’s how we begin. So we’ll sit at a table with four storytellers and a curator and say “All right, we’re doing a show about… technology,”-or heartbreak, or betrayal, or whatever the theme is, and we all talk about different moments in our personal narratives. (All the stories you hear at our shows are real.) So we swap stories and try to find the four that are going to create kind of a wide net of discussion around this idea. Then the storytellers go home and get an initial draft on the page, later we bring those back and get feedback from one another. It’s generally a three-month process from the initial story-swap to when that piece goes up.

In a city where any night of the week you’re never more than a CTA stop away from a reading event, what makes 2nd Story unique?
I think what makes us different from other series is that we’re not booking the person or the performer—we’re booking the story. We craft the stories initially to be told to a live audience; that audience can be one person, it can be a hundred people, it can be five-hundred people, but even if it’s five hundred we want that intimacy of just one person, we want that kind of connection to happen. It’s like that moment when you’re sitting around swapping stories with friends, and sometimes those stories are very hilarious, sometimes they’re very confessional, sometimes they’re very painful. Sometimes you get all of them in one story. What’s important to us is that the audience feels connected to the story and that they feel like they’re in a safe space. Even the stories that are really heavy or difficult we’re trying to tell them in such a way that the audience is going to connect.