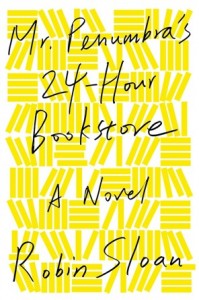 “Mr. Penumbra’s 24-Hour Bookstore” is about a bookstore clerk in San Francisco. The store, owned by Mr. Penumbra (and, you guessed it, open twenty-four hours a day) is a bookstore lover’s dream: narrow, dark, books stacked tight and high, requiring a ladder for general accessibility.  Clay gets a job on the night shift after losing his job as a web designer for a West Coast bagel company (anyone who’s had the misfortune of eating a bagel in San Francisco will understand how tenuous such a job would be). The job comes with a list of rules that sound threatening but are, of course, specially designed to encourage breaking: “You may not browse, read, or otherwise inspect the shelved volumes. Retrieve them for members. That is all.”  Clay quickly discovers that some mysterious business is transacted at the bookstore and begins a sort of madcap adventure to solve the mystery and help Mr. Penumbra.  Along the way he uses the talents of his friends and makes new acquaintances in the technology world. His girlfriend, who works at Google, becomes integral to helping unravel the mystery.

The book is written by San Franciscan Robin Sloan, a self described “Media Inventor,” who clearly has both an enthusiastic zeal for the offerings of the digital age, and a reverential respect for much older technologies: books, typeset, codes—what his characters call “Old Knowledge.” Parts of “Penumbra” are didactic—Sloan’s character reaches out to the techy reader and pulls the neophyte in, describing programming languages, DRM, mechanical turks and even a DIY book scanner in a way anyone could understand. It’s fun how he mixes actual Google initiatives, like the self-driving car, with fantastical ones, like time-machines and organ regeneration (one presumes). Sloan, for one, welcomes our Google overlords.  It’s interesting to compare this book to another recent San Francisco title—Cory Doctorow’s excellent “Little Brother” (2008). “Little Brother” is also about a tech-savvy young man, but where Sloan’s book touts the idea of online sharing, Doctorow writes a cautionary tale about the importance of online privacy.  Doctorow’s book is similarly instructive—the reader will learn about RFIDs, programming, civil rights and even live-action role playing. Both authors open their arms and welcome the nerds (the term is used with great affection) and whisper lovingly to the rest, “Join us.”

“Penumbra” could benefit from a little balance. In Clay’s happy universe, the answers to most of our questions are found in a Google search. He’d like to help build the database, but, it’s worth taking a moment to consider the repercussions of, say, uploading someone’s unpublished book to the web without their permission. However, the character’s excitement for the possibilities of our still-changing digital landscape is hard to resist. “They make crosses and spirals and galaxies of color dance across the screens. The graphs grow new dimensions—first they become cubes and pyramids and blobs, then they sprout long tentacles. My eyes swim as I try to follow along. A Latin lexicon flashes across one screen—an entire language examined in milliseconds. There are n-gram graphs and Vonnegut diagrams. Maps appear, with letter sequences somehow translated into longitudes and latitudes and plotted across the world, a dusting of dots through Siberia and the South Pacific.” Mr. Penumbra is getting great reviews from the YA crowd, but would appeal to readers of all ages—particularly those of us who love joining in the e-reader vs. physical book debate (for the record, this reviewer read an e-version of the book but misses the feel of the page between the fingers).  This love letter to old and new knowledge reads like a modern classic.  (Kelly Roark)