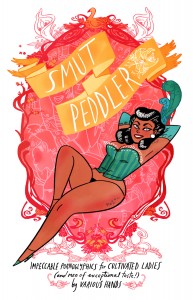 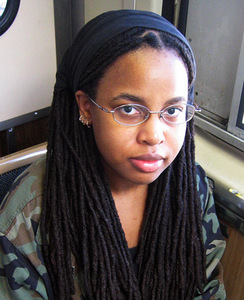 Then what did you do?
I emailed the two editors and asked would they be cool if I did a resurrection of “Smut Peddler.” They were all, “Go for it, that sounds like a great plan!” So I did; I put out the word that I was going to do this erotica anthology, and most amazingly of all it was going to be PAYING WORK, that rarest of butterflies in indie-comics publishing. I got a lot of submissions, many of them amazing, and you can read those in the book. Some of them were not so amazing (laughs.) Eventually I picked the best of them, paid them.

The first story that opens this book is between two guys, one of whom is handicapped: he’s on forearm crutches, and it ends on a rather somber note. Which I thought was great, in that it sends the message that this collection was not afraid of presenting a diverse range of experiences and characters.
I had so many good submissions to choose from, but that one you mentioned is first because it’s my favorite, let’s be straight. What I loved about it was that it was inclusive, and—this is bizarre, but—I liked it because it was awkward. Something about that earnestness got to me (laughs). I was very unprofessional and I wrote the author to say, “you are my FAVORITE!” You shouldn’t do that but I did. It’s been my experience that one of the things that’s really missing from porno is the emotional element. It’s not that women don’t find visual erotica stimulating, it’s that when they are introduced to a situation, and I know I tend to dwell on the absurdity of a lot of pornographic situations, you know the old standards of, “I can’t afford to pay you, Mr. Cable Guy, but…” and that’s porn that isn’t aimed at women who are looking to get turned on, it’s aimed mostly at guys who aren’t primarily that interested in the setup, they aren’t interested in WHY these two people ended up in a bed. (Not universally, of course.)

Prior to this, you had another book that was crowd-funded, the graphic novel “Poorcraft” about living on a tight budget. How did that initially come together?
“Poorcraft” was my very first Kickstarter project and it produced a book I am equally proud of. I always said there were all these things I wish I knew. I was raised by a doctor, okay? I grew up in the suburbs, I had tons of privilege and tons of opportunities. I went to college, dropped OUT of college, and hit the real world like a bomb, and had to learn a lot of things the hard way. Things like how to pick a roommate, how to choose where to live, transportation stuff, et cetera.

Why did you decide to use crowd-funding to publish it?
I heard about  it during a panel at a con in Chicago from a guy named Gordon McAlpin. This was in 2009, and I asked him what Kickstarter was, and he explained it, and I thought “That’s cool.” I approached my friend Diana Nock to draw it, she took a page rate, and it took us about two years to finish the book. What that taught me is the next time I was going to do a Kickstarter the book was going to be finished or nearly finished before I do it. It came out, it’s beautiful, and if you know anyone who’s out on their own for the first time, it’s a great resource.

How did your second crowd-funding experience with “Smut Peddler” work out then?
Literally my business went broke paying the page rates. The page rates came to about $17K, fifty bucks per page. My bank account was completely empty by the time the Kickstarter launched. You know how people who do projects on Kickstarter say “without you this couldn’t have happened?” Without the project’s backers “Smut Peddler” still would have happened, but it would have happened in four or five years when I’d saved up enough money to get it printed. The goal was for $20k and it got funded in nineteen hours, and went on to make $83K. Because I am vain, I looked up the stats and it is in the top seven percent of all Kickstarters ever, and it is the most successful porn-y project on Kickstarter. It drew an awful lot of attention, good attention and bad attention.

“Smut Peddler” is available in print ($30) and PDF ($15) editions from ironcircus.com, along with “Poorcraft” ($10 print/$5 PDF). Spike Trotman’s web serial “Templar, AZ” can be found at templaraz.com.