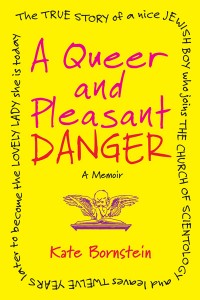 In the never-ending battle for identity between what is thought of as “mainstream” and what we consider “alternative” or “outsider,” it’s easy to forget that the margins of society have margins within them as well. For sometime now the dirty laundry in the LGBT culture has been the hesitance among some gay and lesbian institutions and communities to accept bisexual and transgender individuals—let alone those who identify as genderqueer, or asexual, or gender-neutral. (The Michigan Womyn’s Festival’s policy against transwomen is perhaps the most public and prominent of these biases within the queer community, but far from the only one.) In a time then when more and more people find themselves on the outside of the outside, it is increasingly important that voices be raised against the Will-and-Grace-ification of nonheteronormative identity. The internet has certainly opened the gates for such a discussion, but this year also saw three books published that challenged ideas about sexual and gender identity with style, heart, and energy.

A Queer and Pleasant Danger, by Kate Bornstein (Beacon, $24.95)
One of the most pre-eminent trans-activists, Kate Bornstein has written and edited numerous books on gender identity and being an outsider. Remarkably, this memoir is her first book that’s just about herself, and the twisty windy path she took in life. From her childhood as an East Coast Jewish boy with an eating disorder, to life as a high-ranking officer in the then-burgeoning Church of Scientology, to performance artist, to S&M bottom; Bornstein’s life reads like a Chinese puzzle box of outings, a harlequinade of identity. The writing is riveting, and were it all made up it would be a novel to rival Chabon for its absorbing characters and games of revelation. But it’s all true, and all the more heart-wrenching for it; Bornstein wrote the book as an attempt to connect with the estranged daughter she hasn’t seen in over thirty years. The final chapter of the book, after all the tell-alls, confessions and revelations, is a heart-to-heart letter reaching out. Regardless of what someone may think makes them an outsider, “Danger” is a epistolary outreach that says unabashedly “Whoever you are, whatever you are, I love you.” 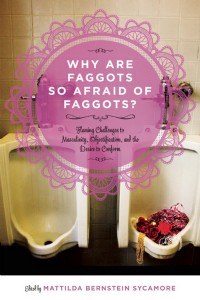 Mattilda Bernstein Sycamore’s third anthology of essays tackles the shift from the homo generation to the homogenized. Everything from queer machismo to pornography gets hung out to dry and autopsied, digging into the social tropes that dictate what constitutes “OK Gay.” Being something of a manifesto against conformity, there are any number of views and ideas, all following different threads and raising a  number of interesting questions. All of them though have one constant: they are written from personal experience of disenfranchisement, neglect and commodification. Whether about being a nonwhite queer living in the shadows of distrust in post-9/11 Manhattan, or finding the preference categories on a gay porn site a Kafka-esque horror of denial and negation, these are stories that cut right to the heart of the trend-tempered cliques that lead to the once radical and insurrectionary Pride parades becoming saturated with floats promoting beer. 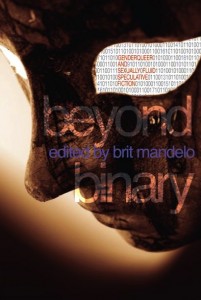 Meanwhile, past the second star to the right, and gaily forward until morning, is an anthology of science-fiction and fantasy stories with a twist on gender roles. Exploring genderqueer and sexual fluidity through the imagination, editor Brit Mandelo has put together a remarkable collection of fictions that range from a magical realism tale of cross-dressing set on a WWII gunship to a gender-neutral sword-and-sorcery romp that wouldn’t be out of place in a Fritz Leiber collection. The anthology also boasts Catherynne M. Valente’s short story “Palimpsest,” about a sexually transmitted city, which inspired her Lambda-award-winning novel of the same name. Possibly the most inspiring of the three books reviewed here, “Beyond Binary” looks well beyond what is and offers ideas as to what could be.

It’s not enough, and it’s never going to be enough. Living in a major metropolitan city like Chicago it is easy to forget that there are those who are trapped by economics and geography in places where there is no support, only an accepted social standard of hostility. And even then, there are those who make their way to the other side of the rainbow and find only blank stares and mixed messages. But that these books are able to exist and be made available (by the avuncular garde of the small presses, no less) means that someone can reach out across a sea of words to say “You are not a freak and you are not alone” to someone who needs to hear it more than they need to take that next breath of air.