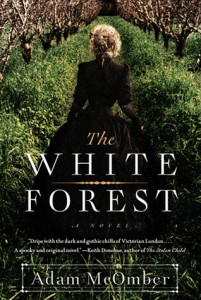 What sets “The White Forest” apart from other contemporary novels is Adam McOmber’s careful attention to language. While it is the Columbia College professor’s first full-length novel, “The White Forest” is written with an imaginative and haunting prose reminiscent of H.P Lovecraft.

Set in Victorian England, “The White Forest” (much like Whitman’s famous brag) contains both contradictions, and multitudes. Told from protagonist Jane Silverlake’s point-of-view, this is a novel that makes a conscious decision to conflate the pretensions of a stricter time period with the inner turmoil of a dark obsession. The story begins with a structure typical of a mystery novel or a missing person’s tale. But over the course of the narrative this structure is subtly and expertly recalibrated not only to the reader’s surprise, but to the great benefit of this utterly enjoyable story.

Without giving too much away, Jane Silverlake is not your typical Victorian heroine.  She has the ability to discern, through touch and through sound, that which is not only indiscernible, but unknown and uncared for in a typical novel, or typical worldview. Jane’s ability acts as a foil to the time period she is relegated to, and forces the reader to draw a parallel between the plot and the commentary on gender roles and assumptions that are subverted throughout the plot. Clearly, Mr. McOmber has a great deal of respect for his protagonist, and for the ways in which we are all implicated by that which is unseen, unheard and unknown.

Many reviewers have credited Mr. McOmber for his ability to create such a totally engrossing, suspenseful work, but what is most fascinating about his initial foray into the novel is his ability to blend an entertaining story with a careful attentiveness to gender, culture and literary theory. “The White Forest” is what happens when tropes common in popular literature (Gothicism, witchcraft and romance) are exploited with actual knockout talent and dedication to craft. (Raul Alvarez)