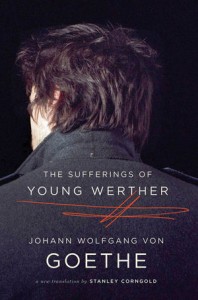 And now a new translation of that old (more than 200 years old!) literary work which, for better or for worse, has forced just about all art after it to consider its influence—particularly those seeking an audience. Seeing as Goethe’s Werther was ten times the tragic figure who young, heart-confused European men sought to be, that Holden Caulfield became to American men in the twentieth century, it’s amazing that this book isn’t more discussed. Amazing that this keynote text in the birth of the modern literature—which also, perhaps, most originally engaged the human race’s long and storied obsession with Suicide And Art—isn’t discussed ad infinitum.

In Werther there is not just Holden—there is Jimi Hendrix, Kurt Cobain. Werther, a protagonist so perfectly at odds with his world that he, himself, is art (or, as another might term it, “a real piece of work”), a young man so fixated on transcending his world that he’ll chase his subconscious love-lust obsession so far down the rabbit hole that he’ll boil over, boil over so entirely that offing himself is the only natural next step.

As the most remembered work in the so-called “Sturm und Drang” movement of its day—which unfathomably gave the author of what was not yet called “fiction” the power to cast the world according to his own values, his own feelings, his own crazily personal self—we can now see the work as the genesis for what’s called rock ‘n’ roll—that singular artistic outlet that’s equally cathartic, maddening and, if taken all the way to its ideological endpoint, dangerous.

Werther’s transition into a full embrace of this tempting lifestyle is, at times, excruciating for the reader to behold. His narrative is rife with misleading wisdom—the kind that suggests he’ll be patient enough to wait out his obsessive feelings for the woman Lotte: a married mother he’s decided to aim his whole purpose of life toward. The power of the emotive lust within this longing is, ultimately, Werther’s utmost priority. And Werther’s want for his most animalistic, natural, and poetic self is the key to his artistic movement’s meaning. In the alternative to the tone of the popularly accepted author of his epoch (one which provided grand meaning through a thorough study of the humanities, at top institutions), Goethe’s literary creation unwillingly sparked a countless wealth of art, in all following generations. “It is alive,” Werther opines, in reference to the power of his feeling, “it exists in its purest form in that class of people we call uncultivated, that we call crude. We cultivated people—malcultivated into nothing!” “[T]here’s one good thing!” he later says; “What is called human feeling!” His lack of psycho-emotional moderation is his undoing, but the extremity of Werther’s vantage point is the kind necessary to move the larger conversation of art along.

And that the book moved the conversation is clear: its impact is as inextricable from the literary canon as Werther’s feelings are from the idealized person of Lotte. What translator Stanley Corngold calls Goethe’s grasp on the “range of subjective experience” is a world, before Werther, forefronted only by the unpublished ranks of plebeian classes. In this entrancing whirlwind tragedy, Goethe achieves the amazing (albeit historically inevitable) task of making all quality artists beholden to their own feelings. Whether they can control them is a question for another day. (John Wilmes)