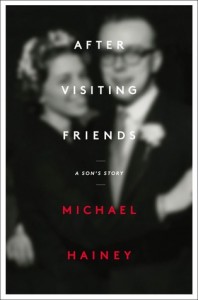 GQ deputy editor Michael Hainey, Chicago-raised and educated, is known to friends and professionals as a very good guy in a glamorous, sometimes cutthroat field. For years Hainey has helped run the show at one of the hottest men’s magazines in America, all the while keeping a dark family secret dating to his childhood and the heights of Chicago journalism. In “After Visiting Friends” Hainey finally turns his reporting skills to the riveting mystery of his news-editor father’s untimely death. Chicago Sun Times newsman Bob Hainey was found inexplicably DOA in the middle of the night on a North Side Chicago street in April 1970, when his youngest son was only six years old. But the details did not add up.

The younger Hainey pressed his mother for more about the tragedy that left a haunted, silent family. None came, either from her or Uncle Dick, the feared Chicago Today executive editor, who first telephoned his mother of the death. As the son rose in his own career, he strove to match the absent father’s reputation, dreaming of him, pondering the conflicting obituaries and seeking answers. In a magnetic style reminiscent of Capote and Elmore Leonard, Hainey details what he found next.

For readers interested in Chicago journalism’s crucial turning-point years, when men and women began covering Civil Rights and the Democratic Convention but still sported nicknames like Natty Bumppo and Stormy Strong, “After Visiting Friends” is a treat. The reporters drank JB on the rocks at joints like Radio Grill, Boul Mich and Andy’s—the last a horseshoe-shaped bar replicating the exact desk where Bob Hainey worked the high-stress night slot position. Imparting details from his research with retired reporters pining for the old days, Hainey has produced an important work of urban history.   As the old ties binding cops, reporters and politicians frayed, and young intrepid women broke into the powerfully charged netherworld those men once owned, nothing was as it seemed.

What sets this book far above some souped-up Jimmy Breslin is the hypnotic poetry of Hainey’s style—his mother’s steely reticence, a forgotten cemetery flanking O’Hare field, and a young boy’s yearning to meet the charismatic, brilliant, handsome father. Meditating on the Parable of the Prodigal Son (which his mother hated), Hainey evokes the growth into adulthood of a new writer’s gifts. If you had a son, one crony asks the younger Hainey, would you want him to know your secrets? This gripping memoir suggests a beguiling, surprising answer. (Ted Anton)

Michael Hainey will be in conversation with Bill Savage at the Harold Washington Library on February 25 at 6pm, and will be reading at Women & Children First on February 27 at 7:30pm.