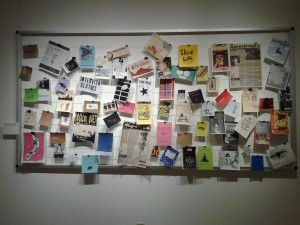 Chicago proclaims print is not dead. Annual events like the Chicago Zine Fest (March 8-9) and the Chicago Alternative Comics Expo, or “CAKE,” (June 15-16) are evidence of the growing local support for Chicago’s self-publishing community. The latest to join the cause is the University of Chicago Library, as they present “My Life is an Open Book: DIY Autobiography,” an exhibition focusing on woman self-publishers from Chicago.

The university’s library has been actively collecting zines and self-published materials for their catalog. “We were very excited by their diversity and how alive they feel,” says Sarah Wenzel, bibliographer for Literatures of Europe & the Americas at the university. “We thought other people would like to see the artistry, writing and variety of the collection.” And that is exactly what you can expect from the exhibit. Local self-publishers and artists are featured on display, ranging from personal zines to mini-comics.

“Chicago has a very rich and diverse self-publishing community,” says Grace Tran, one of the organizers of CAKE. “The exhibit does a good job of capturing this.” Tran’s zine “Day Trips,” featured in the exhibit, includes two stories: a comic and a nonfiction essay. Self-published zines are generally released in short or limited-edition print runs. “When I made it,” says Tran, “I didn’t put so much thought into it as a lasting object because its content captured a fleeting moment in my life, and the form worked because zines are so ephemeral. Being included in this exhibit, in some ways, is the opposite of what I intended for that zine, but I also feel honored to be a part of it.”

Tran isn’t alone in her process or interest in ephemera. Kaitlin Kostus, a self-publisher now printing the title Koshka, which focuses on Eastern European culture, is featured in the exhibit for her 2004 zine “Ugly Cutie.” The zine explores issues of sexual confusion and self-hatred that are unfortunately prevalent in teenage years. “I think the collection is a fantastic idea because preservation of local zine cultures is always a good thing,” says Kostus. And she speaks from experience, considering “Ugly Cutie” has been kept alive through the efforts of Billy the Bunny, who founded the now defunct “Loop Distro” and who produces reprints of “Ugly Cutie” to this day. The exhibit gives life to works like these not only in an effort to preserve but also to foster community and enable community research. “I had been hoping for a way to connect with the Zine Fest, which I’ve attended since it started and admire greatly,” says Wenzel. “The exhibit seemed as if it might be a good way to promote collaboration. Also, as our collection gets to a critical mass, I would like people to be aware of it and see it as a resource.”

In curating the collection, the library received help from a cornerstone of Chicago’s self-publishing community: Quimby’s Bookstore. Working with Quimby’s, Wenzel was able to procure titles with which to populate their special collections. “Quimby’s helps us by setting aside zines from Chicago or with a Chicago connection for us,” says Wenzel. “Quimby’s continues to educate me, introduces me to people in the local community, gives the library useful information, answers endless questions, and provides no end of moral support.” Liz Mason is the manager at Quimby’s and also the writer of the creative non-fiction and at times autobiographical zine, “Caboose,” multiple issues of which appear in the exhibit. “I enjoy watching it unfold, since I have the unique vantage point of being at Quimby’s, which is sort of like an independent publishing trading post,” says Mason.

The exhibit’s focus on women in self-publishing has been well received. “I was even more geeked that it was an exhibit on zines made by women because we make the best stuff,” jests Kostus. Looking over the materials in the exhibit, there is richness to the collection. Personal stories dealing with aspects of life and love fill the pages on display. Each work is unique in layout, artwork and even construction. Yet there is a clear sense that the effort to create each of these publications relates to and captures the spirit of the author. “This is a really compelling collection of memoir-based zines that tend to get overshadowed by culture or music zines,” says Mason.

A focal point of the exhibit is a large wall display of publications hanging from a network of horizontal metal wires. The installation is due to the creative efforts of Exhibition Specialist Joseph Scott. Additional materials featuring early book-binding techniques are also included to provide historical context to their modern-day equivalents. This exhibit widens the lens through which the public can understand and enjoy self-publishing efforts. “There’s a lot of great work being produced in Chicago, and I appreciate events like this exhibit as well as Chicago Zine Fest and CAKE because they offer readers and creators a chance to engage in and explore the current offerings of the self-publishing community,” says Tran.