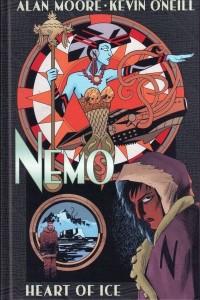 In the 1980s, Alan Moore reinvented the wheel for American comics with “Watchmen,” a metaphysical Cold War allegory that took the archetypes of western superheroes and used them to remix conventional funny-book storytelling. He hoped to set an example for narrative technique, but instead saw that the world was beating a path to his door for a different mousetrap he’d set: the idea of costumed adventurers as violent, emotionally damaged personalities. In the aftermath of a series of troubles with his then-publisher DC Comics and its parent company Warner Brothers, Moore left the mainstream, jumping into deliberately anti-commercial work like the meta-literary pornographic “Lost Girls” and the holistic homicide history “From Hell.” Since then he’s penned a novel, launched a short-lived publishing company, studied the mystic arts, acquired a side career as a spoken-word artisan, married longtime collaborator Melinda Gebbie, and become a grandfather.

Since his transition away into less corporate work, Moore has moved away from comics almost entirely, save for a few Lovecraftian crime comics which blessedly eschewed the nostalgic castration of the horror legend’s work to bring to light the man’s dark paranoia and unpleasant racial and sexual ideologies, focusing on his League of Extraordinary Gentlemen series. The latter began as a Victorian action romp, assembling characters from late nineteenth-century speculative fiction such as the original explorer hero Allan Quartermain from “King Solomon’s Mines,” Mina Murray from “Dracula,” the Invisible Man from “The Invisible Man” and others. As the series evolved, Moore and his collaborating artist Kevin O’Neill pushed the basic premise to the edges of lunatic genius, incorporating (or at least attempting to) characters from every work of fiction—or at least those that are either safely in the public domain or analogized for copyright protection—in the process becoming a meta-commentary on the nature of fiction itself.

The most recent volume of the series, the hardcover graphic novel “Nemo: Heart of Ice,” brings the two threads remaining in  Moore’s comic-book work together. Set in 1925, it focuses on the piratical daughter of Captain Nemo, Janni Dakkar, who opens the book by pillaging a shipload of treasures from the New York City warehouse of Charles Foster Kane; estimated cost…no one can say. Having taken over from her late father as captain of the Nautilus, Janni has grown weary of mere waterway robbery and elects to reattempt one of her father’s abandoned explorations into the heart of darkest Antarctica. In pursuit are a trio of American science gangsters, hired by Kane, who aren’t afraid to deploy violence to achieve their ends. But the southern pole holds terrible secrets in unnatural forms in the world of League, and being tasered by a cocky analogue of Tom Swift is the least of Janni and her crew’s worries.

For fans of the League’s earlier more plot-driven volumes, it’s a welcome return to form. “Nemo: Heart of Ice” is a fantastic standalone volume and O’Neill’s artwork is at its best ever here, conveying not only the geographic and architectural weirdness of the place but the psychological decay experienced by the characters as they confront the very foundations of madness. 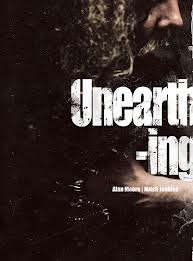 Madness plays a role in the other book Moore has out this year, the prose-poem “Unearthing,” a metatemporal biography of his friend and mentor Steve Moore (no relation). The pair’s relationship goes back to when Alan Moore was a teenager. Over the many decades since, Steve Moore has acted as a mentor and collaborator in matters literary and metaphysical, showing the young “Watchmen” author how to write a comic script and later assisting with his explorations in ceremonial magick. The book opens with a historical meditation on the subject’s neighborhood, Shooter’s Hill, before coming into the present day and offering a lyrical portrait of the shaping of Steve Moore’s life and interests. His interests in art and the occult ultimately lead to either a romance with a goddess or a complete mental breakdown, or both. The author himself is called in to evaluate. The results are… stranger.

It’s Moore’s second foray into straight textual narrative, after his 1996 novel “Voice of the Fire.” In terms of tone and tenor, it’s less of a work of conventional biographical writing and more of a substantial work of prose poetry. The text is accompanied by the numinous and ethereal photographs of Mitch Jenkins, and the two threads of the book’s artistic content are laid out by Mark Millington and Paul Chessell. Most of the time the arrangements of the text with the images serves to give the visuals space, and on a few occasions lend a sentence or two an additional amount of gravitas. There are a few instances, unfortunately where the layout impedes the easy reading of Moore’s beautiful prose, sometimes requiring the rotation of the book, or the assistance of a magnifying lens.

Despite these minor issues, “Unearthing” remains a haunting and enchanting book, in both literal and figurative terms. Moore is currently at work on a massive novel of “Infinite Jest”-ian proportions about his hometown of Northampton England, and this gives something of an indication as to where his non-comics writing is evolving toward. The only question then is if Moore makes a resounding enough splash in the prose world, where will he run to next? (Greg Baldino)