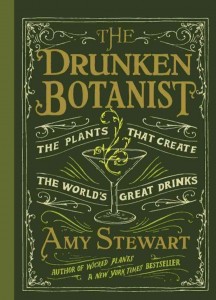 Where some of us see a liquor store, Amy Stewart sees a greenhouse. And not just any greenhouse—a “fantastical greenhouse, the world’s most exotic botanical garden, the sort of strange and overgrown conservatory we only encounter in our dreams.” Whether it’s vodka, whisky, or gin, there isn’t a bottle in the store Stewart can’t “assign a genus and a species to.” It’s true. “The Drunken Botanist” is the proof.

Starting with agave and making her way to wheat, with pitstops at barley, rice and sorghum (and corn, and potato, and, and, and…), Stewart gives us flash histories of each primary ingredient. In a section on rye, for example, we learn about the grain’s chemistry (low in gluten, high in pentosan) and the implications of that chemistry (generally needs to be mixed with wheat). We learn how it grows and where. We learn that Pliny the Elder thought it “an inferior grain,” but that George Washington distilled the stuff himself. We learn that a fungus that grows on rye may or may not be partially responsible for Salem witch trials. We also learn how to make a Manhattan.

With basics of alcohol covered, Stewart moves onto the herbs, spices, woods and fruits that make liquor interesting (and palatable). Each trivia-packed entry, Allspice through Violet, imparts a general sense of the ingredient in question: cloves enhance vanilla flavors; pine, a hit since the Neolithic period, adds a Christmasy pungency to cocktails.

Like her previous pop-botanical guide, “Wicked Plants,” which catalogued the many varieties of fatal flora, “The Drunken Botanist” reads like a chatty encyclopedia, equal parts coffee table and reference. It’s not particularly oriented toward answering your questions—while there might be what you’re looking for in there somewhere, “The Drunken Botanist” isn’t designed to be consulted for mundane things, like what to do with walnut liqueur or how to make a Mai Tai. Instead, it’s meant to be meandered through, a boozy adventure tour through the history and chemistry of the global liquor cabinet.

“If you’re a gardener,” Stewart writes, “I hope this book inspires a cocktail party. If you’re a bartender, I hope you’re persuaded to put up a greenhouse or at least plant a window box.” I am neither a gardener nor a bartender. I will probably not host a cocktail party with my garden spoils; it is unlikely I will put up a greenhouse in my lifetime. But to take pleasure in Stewart’s connoisseurship, you don’t need to: a taste for facts and folklore and the occasional mixed drink is more than enough. (Rachel Sugar)

The Drunken Botanist: The Plants That Create the World’s Great Drinks
By Amy Stewart
Algonquin Books of Chapel Hill, 381 pages, $19.95