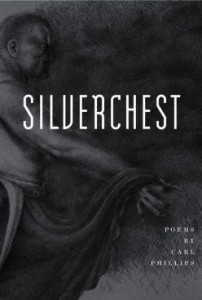 With his signature contorted syntax, Carl Phillips ushers us through the woods of pathos and logos—a steady procession through ourselves and those we love. “Silverchest” vividly reminds us that we are reading a book of individual pieces, pieces that have stood and continue to stand on their own curious and wobbly legs. Phillips imbues these examinations of the mind, memory, the heart and human intimacy with a delicate and deliberate pace that defines the world of each poem. The voice is patient, insistent, tells all—every last hesitation, every stutter of thought, seducing a reader to the point of certainty, of conviction, and then pulls back. And this seductive voice, this belief riddled with doubt, ties each poem to our lives, to the knee-jerk nature of life. These poems, their condensed heft, revolve around moments of clarity, of simplicity with subtle, vibrating metaphors and architectures that force us to slow our read, to intentionally move from word to word, increment by increment. Early in the collection we come to the poem “And Other Animals,” suggesting an ellipses before the title and contributing to the tone of “Silverchest”:

So the dead become earth

and then nothing, things that will never matter

now in the way they used to, for—

used to, or so we tell ourselves, pretending grief

Whether with grief or joy, overheard words or description, the speaker of “Silverchest” carries a gentle skepticism, a careful approximation—always “mostly” or pausing for a second-guess—which keeps the reader vigilant, rubs off along the way, and when those slick jabs come we’re knocked from our element: “After the afterlife, there’s an afterlife” from “After the Afterlife,” and “I love you means what, exactly?” from “So the Mind Like a Gate Swings Open.”

A true master of syntax and punctuation, Phillips effortlessly drapes elaborate sentences over whole poems. “My Meadow, My Twilight,” for example, drops a jolting and skeptical observation:

But to look up from the leaves, remember,

is a choice also, as if up from the shame of it all,

signing the ground before you the way, lately, all

the branches seem to, or you like to say they do,

which is at least half of the way, isn’t it, toward

belief—whatever, in the end, belief

And this frequent skepticism, the calm but intense thought-aloud wanders from mild whimsy of imagination to jarring, silencing violence. “Ghost Hour” sets a scene:

A stillness falls across the blue

freely with strangers, tower over them, leave them behind

for the other life, meaning this one, where a stillness falls

Darkness is a fact of life, of thought, of feeling, of relationship. Without cliché, these poems show us how life can harden us and at the same time make us tender. The way of things is slow-going, intricate and much more monolithic than we notice. Phillips’ blend of thought and heart shows us with acute magnification that every moment, all faith and doubt alter our next experience, relationship, understanding of the world. “Your Body Down in Gold” shows the speaker’s fight and zeal:

You can make of the world’s parts something

elemental, you can say the elements mean

something still worth fucking a way forward for:

true to form, coming undone all over again

Until the very last, this unnamed speaker—maybe Phillips, maybe some everyman, or everywoman—leads us through this silver chest of life, a Pandora’s box, an aged and resilient chest bearing the beating beneath it. The title poem gives us a bow, glints with light as the book concludes, but reminds us, as always, that certainty and absolutism come almost never:

Unafraid is what we were, I think, and then afraid,

though it mostly seemed otherwise. I opened my eyes,

You: the dark that nothing, not even the light, displaces.

You, who have been the single leaf that

There’s a jumpy glare on the inside of this book’s back cover, the partial flash of the sun from a watch face. It’s vivid and washed out and reveals little in the dark. But with time and resilience, with giving over and daring that space, we might figure out a bit about ourselves and those we love, what we believe and doubt, and that’s where life comes to pass. Lock it all up and revisit it in your silverchest. (Wesley Rothman)