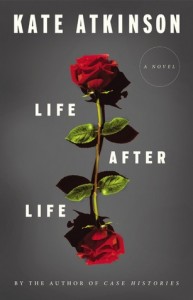 Kate Atkinson burst on the scene in 1995 with “Behind the Scenes at the Museum, ” an intricate family drama for which she won the Whitbread Prize. More recently she’s been writing mysteries surrounding a Scottish detective named Jackson Brodie. Atkinson certainly made a fine addition to the grand lineage of British women mystery novelists. While these novels retained her sophisticated style and rich language, they had something of the (dare I say it?) commercial about them. Oh, the lowly mystery! How many Gaudy Nights must be written before it’s marked literature with a capital “L”?

In any event, “Life After Life” is a return to the style of her earlier novels—with a twist. Ursula Todd is born again and again, each time with an opportunity to improve on the last. At the beginning, a child is stillborn. A quick restart. A child is born, and takes a breath. As a toddler she falls from a roof. A child is born. Something makes this child hesitate before rushing out to dangerous heights. Fevers kill. Restart. It’s difficult to survive childhood. These early pages slip by quickly, as if the author were casually stretching her fingers while the audience catches up. Catch up.  Read it twice, if you’re like me, just to marvel at her technique the second time around.

When Ursula (finally) arrives in her early twenties she must survive the second World War. In her various incarnations she hides from bombs in basements in London or works on squads to dig people out from rubble. Atkinson finds a way to play with that question: What if you could stop Hitler? Ursula studies German and finds herself hobnobbing with Adolf and Eva Braun. If Ursula pulls the trigger before being shot herself, doesn’t she have another chance? Occasionally a character wonders, “What if we had a chance to do it again and again… until we finally did get it right?” It’s the kind of question asked at a cocktail party. Ursula has little patience for it.  “I think it would be exhausting,” she says.

Not only is the experience of time explored in “Life After Life,” but also what it truly means to “get it right.”  For Ursula, it’s often how to navigate her world as a woman. Men who destroy her in one reincarnation are rebuffed in the next. Ursula feels time like a palimpsest—a text that’s wiped clean and used again, the underlying words sometimes bleeding to the foreground. “Life After Life” is structurally exquisite, but the real pleasure comes from following Ursula and her family as they improve their efforts.  (Kelly Roark)