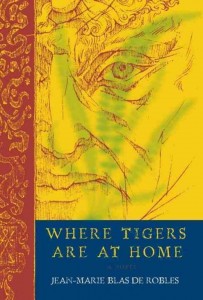 “Where Tigers Are at Home, ” by the French-Algerian writer and philosophy teacher Jean-Marie Blas-de Robles, was published in English this year. In 2008, it won the French literary award Prix Médicis. What reviews I’ve found of this novel have been positive, if not glowing. I’m sorry to report that I am baffled on this front.

The novel is enormous, over 800 pages long. It follows seven different plots, all but one taking place in contemporary Brazil, and the other, flashing back to seventeenth-century Europe, serves as a kind of focal point for the book. It follows a seventeenth-century priest, Athanasius Kircher, and his devoted follower, Caspar Schott; Eléazard, a Frenchman living in Brazil who pursues a failed love-hate study of the seventeenth-century religious figure and maintains himself in Brazil by writing desultory reports to Reuters. We also meet, in separate subplots, his soon-to-be-ex-wife Elaine, a geologist traveling deep into the jungle on a dangerous expedition; his daughter Moéma, a rebellious bisexual college student who swindles her absent father in order to fuel her drug habit; a handicapped favela-dwelling beggar named Nelson; a corrupt governor named Moreira, who makes dirty deals with U.S. corporations and government officials. How are they all connected? The characters start crossing paths—wait for it—no, wait for it some more—and a little more—on page 281.

The book’s intended aesthetic seems to be a fun but excitingly dangerous adventurous romp through the jungle with drug-traffickers, piranhas, ex-Nazis and a hostage situation with an indigenous tribe. But a few things interfere with the successful execution of this vision. First, the writing is of the “tell, not show” variety: “Much more reserved than Dietlev and therefore less accessible, Milton’s severity was legendary and made him an imposing figure.” Or how about: “Behind it the fur coat of the mango trees swayed heavily, disturbed by audible quivering that shook the foliage from one end to the other.” Or perhaps: “Tears in her eyes, leaning forward as if being searched by the police, Anita desperately scrutinized the bust facing her. […] With an absurd sense of urgency, she read and reread the inscription on the plaster, gorging on it as if it were an exorcism that could purify her.” Who wants to be told a character is an imposing figure, or that another character’s sense of urgency is absurd? Since when have mango trees worn fur coats? Does one gorge on an exorcism? The metaphor-related questions this book raises, like the book itself, seem to be endless.

This might not be such an offense if it weren’t for the other problem with that book: a grotesquely detailed rape scene a couple hundred pages in, before you even figure out what the book is about. The sexual violence is a remembered torture scene of a female political activist during the dictatorship—it illustrates a villain’s evil nostalgia for that era, and the threat he poses in the present to another female character who he plans to treat similarly. I might be sensitive to any depiction of sexualized violence, but this scene is a celebration of humiliation and pain that I feel pretty confident any reader would find horrifying. It’s probably realistic, unfortunately. But here it’s deployed casually, as an element of the dangerous-fun-romping-adventure aesthetic. Oh no! A woman’s virtue is threatened! But it’s not fun. It’s traumatizing. It’s really sick—it’s not just awful, it’s awful with twists and layers and echoes of awfulness. It’s the kind of thing you should never subject your readers to without a really, really, really good reason. And I can’t help but feel that the mild sexists who people the rest of the novel—one of the sympathetic characters at some point gives “one of those little giggles in which he expressed his absolute joy at women’s intelligence”—add to this scene to create an unpleasant aura of general misogyny.

For the record, I express my absolute joy at women’s intelligence by not finding it so unusual that I need to giggle at it. (Alli Carlisle)

“Where Tigers Are At Home”
By Jean-Marie Blas de Robles
translated by Mike Mitchell
Other Press, 832 pages, $32.50