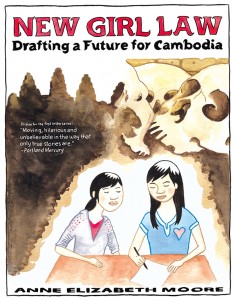 Chicagoan Anne Elizabeth Moore has just released “New Girl Law, ” a book about her experiences working with Cambodian college girls attempting to rewrite the Chbap Srey, the Cambodian female code of conduct. A teacher at SAIC and author of “Cambodian Grrrl, ” Moore guided the project and followed its return to Cambodia, and recently discussed her work’s impact with me.

In “New Girl Law,” the process of the girls rewriting the Chbap Srey seemed quite organic. Did that surprise you?
It did. I think what’s sort of remarkable about that first batch of work that these young women did was that I was like, “You guys should know how to do this,” and because of who I was and how I was brought into the situation and the conditions under  which that project was established, they did it. From there, there’s a whole bunch of things that could happen. People can be like, “This is a really stupid process and it doesn’t work for me at all and I hate it and you’re an American and you don’t understand what we’re doing at all.” Or, a community, a group of people can be like, “Actually, that’s worked for us and we want to do this with it.” And that’s kind of what happened in “New Girl Law.” They came up with this project that we then implemented despite my potential inability to meet the demands that would come with that, but then they did lead this process of pretty amazing work, rethinking the gender policy on which their nation was founded. Like, who does that when you’re twenty?

Can you talk more about the chapter where you take the girls to the Killing Fields, which they have never seen?
That one’s actually hard for me to talk about as literature, and so I tend to talk about it as experience. Both “Cambodian Grrrl” and “New Girl Law” sort of go between journalism and memoir. It gets a little complicated. But I can say that being asked to bring this first generation of young women to go to college in the history of the country to the Killing Fields, as an American, and understanding the full implications of how the U.S government had fostered the situation with the Khmer Rouge in the first place and devastated the economy and killed a lot of people—for me to be entrusted with being, almost literally, the tour guide to this moment of history, that they felt like they didn’t know enough about, was absolutely the most profound experience of my life. And I mean terrifying. So many missteps.

You’ve said you don’t want anyone to follow in your exact footsteps, but what would be some advice to someone who was going to a similar place with a similar plan?
There is no similar place, for one thing. I was getting a lot of emails from women who were like, “I’m going to Kenya and I’m going to do exactly what you did.” And it’s like, you will never accomplish that, because Kenya is entirely different than Cambodia. Being aware of whatever you’re doing and that wherever you’re going is a particular place, and being willing to be responsive to it is the most important thing. That takes research, but it also takes this idea that I’ve been talking a lot about lately called radical noticing, where you basically are willing to be in a situation but you really listen and really pay attention to how you are perceived and how things unfold. Really be aware that you’re being provided a unique opportunity. Whether it’s in Cambodia now, which is fundamentally different from Cambodia five years ago, or any other place on the earth. Tailor a response to that situation based on the situation, not based on what you want out of the situation.

How important was it for you during your time in Cambodia for you to have doubt about the situation and your work?
Growing up as a disaffected punk in the U.S, I wouldn’t have been able to escape it anyway. I have a basic mistrust for almost everything. But, given the political economy of Cambodia and the major and controlling way that the U.S influences it, this particular relationship is so unique, and just filled with such massive degrees of control and abuse and destruction—to not doubt every given, I think, would have been disastrous. But I could have gone in and assumed that everything that I was doing was the right way to do it and have a different career. […] There are moments when I am called into doubt, of course, but yeah, I know people. I know when I’m in a room full of young Cambodian women that there are certain stories that are going to play well, and we can do something with that.