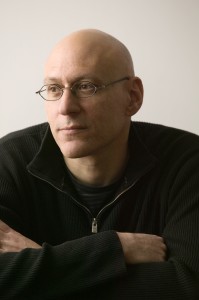 ‘The business of literature is blowing shit up.’

David Shields quotes the phrase from an essay by publishing entrepreneur Richard Nash, and it seems almost the summation of what’s brought us together for the afternoon. It explains the animal that’s operated on subconscious levels for both of us, as long as we’ve taken the task of writing, and writing well, all too seriously. And that much of literature seems to have lost a want to explode—that all the most-sold novels of recent years seem content to accept the nostalgia of the form’s tradition, and to deny the challenge to cut to metaphysical bone and efface the self—is what drives Shields’ last few books. “How Literature Saved My Life,” his latest, is no exception.

But if “Reality Hunger,” the controversial manifesto Shields put out three years ago, did more than enough blowing shit up (which it did), then his new effort acts almost as its trailing paramedic, stitching together the sprawled shrapnel of the aesthetic, philosophical battleground Shields has long been traveling. It’s his attempt to explain that, hard as a time as he gives it, he’s absolutely in love with art. “I live for art, but I can’t stop scrutinizing it,” he tells me. (In person, he’s calm and friendly, effusive with energy and enthusiasm—nothing the part of the kill-all critic some imagine him as.)

And as he and I walk through a brisk day in Hyde Park—where he’s staying for multiple events, traveling to help promote the new book—we find a bind in common. Unable to take any work as only the glowing, saintly port of colorful release many portend them to be, we instead opt to receive each new creative experience as a discursive challenge. To speak with its author, in the ether of art’s endless collective canvas, “until we’re blue in the face,” as he puts it.

That Shields is a ready, willing partner for such an engaged audience makes him an easy candidate for readerly kinship. His work, for years, has felt especially personal to me not just because of the veils upon veils of his self he so freely pulls away, but because of how astutely he questions the very forms of reading and writing. In this pursuit, he’s given serious explication to a simpering voice in my head; he’s given body to the reader in me who’s concerned not just with craft, entertainment, character and plot, but the question of why any of it needs to be put to the page.

It’s a question Shields asks relentlessly, but not one that prevents him from reading almost religiously—to a point that it gives his life meaning. Because while literature doesn’t actually save his life (apologies for the spoiler), it does act as an incomparably effective distraction from death, which is Shields’ ultimate topic; or, as he states it, “the only topic.” “How Literature Saved My Life’”brims with reference, homage and transplants of countless other authors, and so does his presence; he repeatedly tells me of essays, books and editorials I’d “totally love.”

It’s this generous spirit—which also had him asking me constantly about my writing, my family, my girlfriend, my aspirations and my day-job—coupled with his profound skepticism, that makes him such an indispensable voice. Sometimes maligned for attacking traditional forms too harshly, Shields is actually searching for just the right red medicine—that ego-stripping tonic that forces writers away from the sort of lazy bluster that extends novels into hundreds of unnecessary pages, and fails to promote the evolution of literature. “Books must compete with the contemporary technology,” he says, when I liken a physically smaller version of the novel to a smart-phone; something you can easily move with. He’s ecstatic about any idea that pulls thinkers and stylists away from the air-quoted canon, and toward the reality (pun certainly intended) of present circumstances.

Such skewering is, appropriately, perhaps the only way to save literature’s life. As the Nash essay (“What Is The Business of Literature?”) explains, the sense of exceptionalism permeating the publishing industry—which seems to believe that the world of the book is less subject to atomic market shifts—is the thing sinking itself. Shields’ suggestions for reform range from heightened concision (as time and attention come at higher premiums than ever before) to an embrace of the collage form, which purports to bring literature closer to the multicultural throes of today.

But the part of his vision which seems to most stick in the craw of traditionalists is his putting the I front and center. The I is fallible, the I is silly, the I can not always be right; Shields’ work damns the machinations set forth, in so many a tome, to appear masterful. In constantly turning left (“That’s where you find ‘The Waste Land,’ that’s where you find ‘Tristram Shandy,’” he says), and denying the tricks of craft’s trade to, for lack of a better term, “blow shit up,” he lands on the page as something of a confused man; subjective, wondering, exploring, questioning, happily unsure. And it seems that, somewhere along the line, audiences began to favor authors—whether it be as the God of third-person narrator, or the one pulling the strings of their first-person puppets—who stamp authority, conclusion and resolution onto the topical questions they pose in their writing. If you’ve got the moxie to confront something difficult, you’d better put it into terms of tragedy, comedy, or parable that can be easily taken to bed—this is the message of the marketplace. Whether this is a result of readers’ preference or of publishers’ willpower is a question for another time. But after meeting the man, and following him down so many rhetorical labyrinths, it’s safe to say that the difficulty of David Shields, ultimately, is the difficulty of restoring a philosophical bent to literature; of including negative capability as a possible (and likely) endpoint.