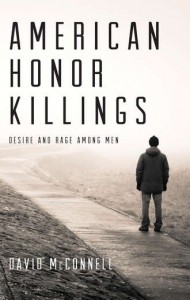 One of the many awful aftershocks of a violent incident like the Boston Marathon bombings is the tendency of public figures to say terrible things while trying to make sense of what happened and why. Among the unproductive statements made recently, unfortunately by quite a few well-meaning people, is an idea that “there’s no explanation for what happened.” Sure, I will grant that there’s no justification. But “there’s no explanation” indicates that we just don’t want to understand. This is an understandable, but regrettable, impulse. It is  an impulse closely related to the constitutive element of hatred: the refusal to understand. When we refuse to understand, we turn the object of our misunderstanding into a potential object of hatred. We must recognize that there are explanations. They may be illegitimate, awful and evil but there are explanations.

In “American Honor Killings: Desire and Rage Among Men,” David McConnell presents a thoughtful and well researched, if uneven, alternative to the silence impulse. He writes about violence perpetrated by men against men who are either gay or perceived to be gay—mostly what could be referred to as “hate crimes” (a label McConnell discards: “admitting ‘hate crimes’ looks like criminalizing motive, and that looks like criminalizing thought”). Instead, “I settled on the exotic-sounding words ‘honor killings’ in the book title, because, incredibly, that’s what these crimes resemble.” It’s a good observation. The murders he describes are all revenge killings for perceived violations of normative, heterosexual masculinity. Like other murders we call honor killings, the motivations for these murders clearly fall on the dark end of a spectrum of human values. They are twisted understandings of honor and pride, but their relation to what we, the normal, would call honor and pride, are what make them both repulsive and fascinating.

McConnell’s attempt to breach the public silence about the underpinnings of male violence is very accessible. His observations are smart, but chatty and personal, which takes the edge off some of his more challenging claims. He picks up on the idea that silence acts as an accomplice to violence: “straight men, who really are socially powerful, have been accustomed to a veil of discretion when it comes to the truth about their private selves, their weaknesses, anatomy, fears, silliness.” This makes for compelling, gruesomely fascinating stories that balance on the line between the inside and outside of subjects’ minds. In describing Darrell Madden, for example, the only one of the murderers who is himself gay, McConnell writes: “He always counted on being the crazy one, willing to go further than anyone else. It was his special act. Without it he risked being too aware, perhaps.” McConnell suggests that the excessiveness of Darrell’s performance of masculine aggression might have been a deliberate, if subconscious, buffer against his own awareness of pain or of wrongdoing.

This kind of interpretive restraint characterizes “American Honor Killings.” Although it struck me as a weakness—I kept looking for the theoretical framework—it may work on other readers differently. Analytic zeal can itself be aggressive, and may be the wrong angle of approach for a mainstream discussion of male violence. McConnell mostly presents the stories in detail, with limited topical observations and brief reflection between them. Rather than theoretical or academic, his writing is almost novelistic (and he is, in fact, an established novelist). His descriptions can be poetically evocative: “Dog hairs and bantie feathers were later found stuck to the oily mouths of the jugs.” The detail demonstrates the perpetrators’ amateur negligence in leaving clear evidence at a crime scene, but it is also a poetic suggestion of the personal—they had pets—and perhaps the human proximity to the animalistic.

In other moments, this novelistic quality is less persuasive, pushing the reader out rather than drawing her in: “The bridge of his nose is broad, which gives him the tawny-skinned air of a lion in repose.” The racial undertones of this description are a little off-putting. Or consider also the patronizing tone of this description of McConnell’s time in Oklahoma, which is nonetheless fascinating: “Oklahoma seems tough on its children, like a badly educated parent. Time and again before interviews, I found myself holding hands around the table in prayer. Our bowed heads, our extravagant humility, felt propitiatory. Then the interviews would turn to the kind of seedy, raucous lives glimpsed on certain TV shows, where the country likes to make a spectacle of itself as we watch and call it pop culture.” The initial simile is disingenuous here, as in this case McConnell is most likely talking about people who are badly educated, relative, perhaps, to his audience. And how about the claim that the country likes to make a spectacle of its seedy, raucous lives on TV? This holds some class scorn, and also deserves quite a bit more exploration.

In this and other moments, McConnell raises questions that beg for a more structured attempt to answer them. McConnell writes of skinhead gangs that a “streak of nerdiness is reflected in endless rules and ranks and taboos and secret emblems.” I don’t think this is quite right—it doesn’t seem like nerdiness so much as a compulsive need for order, for power hierarchies to be made concrete and visible. Perhaps the most provocative question is about why he chooses these stories. McConnell claims in his introduction that homosexuality is almost incidental, which doesn’t make much sense: “If I struck ‘gay’ from this book, or miraculously made ‘gay’ a social and cultural nonissue with a wave of my hand, almost nothing I’ve written would change. I’ve written about young men and pretense, pride, tension, fear, arrogance, ignorance, anger, foolishness.” Of course, he can’t strike “gay” from the book, or from society, and this statement seems to run counter to his central point. Perhaps more clear is when McConnell says it this way: “hatred often seems to exist prior to its having a clear object.”

All the small questions ultimately point to a much larger one: why is it that these mostly poor, mostly white young men McConnell writes about only find a sense of purpose in violently enforcing a cruel, oppressive code of honor? This question, admittedly an enormous one, goes unanswered, but McConnell’s gestures toward answers are provocative, and his portrayals of these men are impressively detailed and thoughtfully contextualized. “American Honor Killings” is an impressive effort to understand masculinity and violence in contemporary U.S. society. It’s a graceful, thoughtful and productive counterargument to the claim that there are no explanations for horrifying violence—one that comprehends the humanity of a kind of violence that we would prefer to call inhuman, and one that I hope can serve as a tool for a deeper public conversation. (Alli Carlisle)