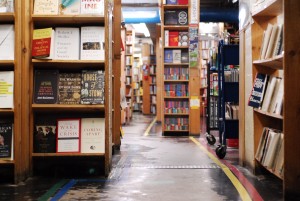 The Seminary Co-Operative Bookstore, a cornerstone in Hyde Park for more than fifty years, has been busy settling into their new location at 5751 South Woodlawn. And while they’ve moved only a few blocks away, it begins a new era in the store’s history. The bookstore, which operates as a member-owned cooperative, designed the new location with its community in mind. The floor-to-ceiling windows offer an abundance of natural light, a contrast to the former location’s basement browsing area. “The new space has worked out incredibly well,” says the Co-Op’s general manager Jack Cella. “Every day people come in and comment on how much they like it, even those who were prepared to dislike it because they have such fond memories of the old location.”

The Co-Op’s history became the focus of University of Chicago alumni Jasmine Kwong and Megan E. Doherty when their alma mater bought the building where the bookstore had long leased space. The two formed the Seminary Co-Op Documentary Project aimed at covering the bookstore’s rich history. “We discovered that we wanted to document the Co-Op, appreciated that we had complementary approaches, and decided to join forces,” says Kwong. They began to collect documents, interviews and photographs from members and patrons. 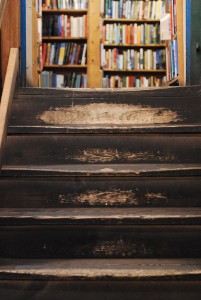 While the bookstore prepared to move, Kwong and Doherty worked with Cella to gather materials for the documentary project and the current exhibition. “Several of us on the staff helped collect artifacts,” says Cella. Doherty, a freelance writer, conducted audio and video interviews with Cella, member owners and supporters which she then housed on the project’s website. With a background as a portrait and events photographer, Kwong worked to capture a visual history of the move to the new location. “We invited people to have their portrait taken in the bookstore, share a favorite Co-Op memory via email or audio interview, or submit memorabilia they have from the Co-Op,” says Kwong.

During the process of conducting interviews, Kwong and Doherty documented touching accounts from longtime bookstore supporters. One instance included former graduate students who started their friendship more than thirty years ago in front of the bookstore and have since authored their own books, now shelved side by side at the Co-Op. Another is that of Cass Sunstein, who recalls a conversation outside the bookstore telling a young Barack Obama, a fellow professor at University of Chicago, that he would be president one day.

The Seminary Co-Op Documentary Project includes copies of the Co-Op’s newsletter “The Front Table,” floor plans, mail and postcards sent to the Co-Op, (and their Newcity Best of Chicago plaque) and will be showcased at the University of Chicago’s Special Collections Research Center Exhibition Gallery. Visitors are asked to contribute to the project by writing their thoughts and comments on “think cards” which will become part of the exhibit. The Co-Op will host a grand-opening celebration at their new location on May 11. At the event, patrons can enjoy family friendly programming, author signings and a talk by author Aleksandar Hemon. (John Wawrzaszek)