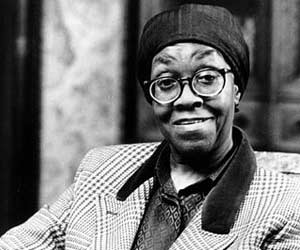 Gwendolyn Brooks, the late Pulitzer Prize-winning poet, became a legend not only because of her writing, but also because of her selfless efforts to give back to the Chicago community, and now the community returns the favor. In honor of her writing as well as her continual encouragement to aspiring writers, the Guild Literary Complex, Third World Press and The American Writers’ Museum will be sponsoring Brooksday, a marathon reading of Brooks’ work on June 7, from 9am-7:30pm. A collection of about seventy readers, including community leaders, high-school students and well-known writers, will spend eleven hours reading her work at the Chicago Cultural Center.

Brooks, a lifelong Chicagoan, often wrote about the city in her poetry, such as “In the Mecca,” a poem about an apartment house located on 34th Street. Novelist, poet and Guild Literary Complex board member Rosellen Brown believes this helps readers engage with Brooks’ work. “We would love it for people to discover and see how important her work is, how it is so much about Chicago,” Brown says. “You can seek out some of the places she is writing about, you can find them, or you can see some of the neighborhoods. It’s extremely local.”

Rather than simply inspiring young writers with her written work, Brooks created writing contests, attended student readings and made a conscious effort to encourage young writers. Anthony Romero, assistant director of Guild Literary Complex, says Brooks even drew money from her personal bank account to sponsor poetry readings and show her support for artists’ works. “Gwendolyn Brooks had a deep well of kindness,” Romero says. “She was always very giving—back to the neighborhood, back to the community—so we wanted to honor that by mirroring [her efforts].”

The first segment of Brooksday reflects Brooks’ encouragement; the day will begin with readings from her children’s poems followed by a teen hour when high-school groups will read. The day then progresses to other readings by community leaders and writers such as Michelle Boone, Commissioner of the City of Chicago’s Department of Cultural Affairs and Special Events, and author Rick Kogan.

Novelist and Guild Literary Complex board member Bayo Ojikutu will read a portion of “In the Mecca” at Brooksday. Ojikutu believes this event will bring listeners back to a time when writing could not be contained within a 140-character tweet. “I fear that there is some potential that the aesthetic meaning of her work will be lost as some of the ideas are pushed to the wayside,” Ojikutu says. “Brooksday brings her back to the forefront… You read Brooks, you read a free mind.”

Romero says they hope the event will grow to become a citywide festival by 2017, what would have been Brooks’ 100th birthday. “I’m excited to see what sixty-plus writers do in this sort of celebration.” (Kathleen Caplis)