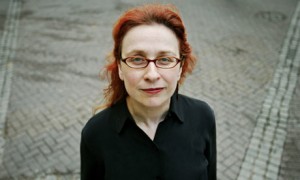 “Raven Girl” is your new book, a modern-day fairy tale about what happens when a postman falls in love with a raven. I understand it was originally written to be a ballet, yes?
(Nods) This is a collaboration between myself and Wayne McGregor, who is the resident choreographer for the Royal Ballet and he also has  his own company which is called Random Dance. So his background is in the world of modern dance, but when he works with the Royal Ballet he obviously works in the realm of ballet. His sensibility’s very cutting edge and dark, and so we’re a good pair. When we started talking about what we might do I said what kind of  story would you like, and he said he would like a fairy tale, like a new fairy tale. And then later he said he would like a DARK fairy tale. And of course what fairy tales that are any good aren’t dark? They’re usually pretty horrifying.

Until they get watered down for the movies.
The nice thing about writing a new one is that it’ll be a while before  they can water it down.

What was the collaboration like?
Talking to Wayne about what would be useful—one of the things that’s great about him is that he’s a fantastic collaborator and he’s managed to pull  together all these different people—and talking about it as a ballet for a minute and not as a book got me writing the story. Vicki Mortimer, who’s doing the costumes and sets, what she’s doing is everything black-on-black, so it’s REALLY dark! Literally very dark! Everybody who’s working on it seems tuned into that kind of goth vibe, so I feel incredibly excited and positive about the whole thing. It really seems to be doing something interesting, and they’ve had to alter the story somewhat in order to make it danceable. Because if you think for a minute the actual story I wrote has dialogue and internal monologue and all these things that don’t happen in ballet. So obviously there’s parts that I wrote that they have to expand and parts that I wrote that have to be cut out altogether. I’ve been following what Wayne and all the dancers have been doing and that’s been really interesting. When I was making the story, I kept checking in with him asking “Is this going to be danceable?” and he said, “Don’t worry about the dance, just make the story and we’ll work it out later.” That was very freeing.

On the flip side of collaboration, many artists need to work in solitude, keeping their work private until it’s 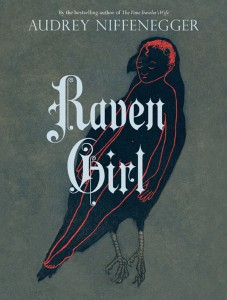 to be released in whatever form. What do you think of the element of solitude in an artist’s work? I feel like the extreme end would be someone like Henry Darger, who made thousands of pages of an illustrated novel that he never showed to anyone, and wasn’t discovered until after he had died, but to me that seems almost toxic.
It’s sort of hard to say what would have been ideal for Henry Darger since he wasn’t somebody who communicated very much with other people. I don’t know, it seems like such an individual thing, really.  One of the reasons I teach is to leave the house every now and again, and get out and talk to like-minded people. On the other hand, I run my studio out of my house and I have an assistant who comes five days a week, so I’m not a particularly solitary person. On the other hand, when I’m writing I don’t really need people around. I just need to be quiet and get things done.

So when Wayne came to you and said he was interested in collaborating on this, what sort of fairy tales were you thinking of? Which ones hold your interest?
I’m not much of a fan of the princess-y ones, you know? The Cinderella-type ones. I’m more interested in the ones on the fringe that are kind of strange—not that they all aren’t strange once you start to think about them. But when you get back to the original versions of things, they do seem very odd indeed. Like Hansel and Gretel, which I think is deeply peculiar. It’s like “Okay, let’s put the children out to starve because there’s not enough food.” And just the evolution of them over time. Apparently in Hansel and Gretel it was originally their own [biological] mother who was going to send them out into the woods; by the second edition of Grimm this was considered too horrifying, so she became a stepmother. People found it horrible that their own mother would do these horrible horrible things. But yeah, the ones that interest me are the ones where you think “Really? Wow!” Like Rapunzel, or Rumpelstiltskin, that’s a weird one. Where when he hears his name at the end he literally tears himself to pieces, because he’s so pissed off, and you think “What would that even look like?”

So yeah, I’m less into the “Random Girl Gets Turned Into a Princess” and more into just the weirdness.