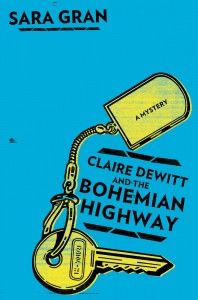 Sara Gran has created an amazing character in Claire DeWitt, the detective in her brilliant series. Miserable, drug-abusing, pill-popping, possibly insane—she’s nevertheless one of the greatest private eyes in the world. As teenagers, Claire and two friends found a life-changing book by French detective Jacques Silette, “Détection,” and started practicing his peculiar methods. In Silette’s world, clues come in unexpected places—dreams, tattoos, fingerprints—not those found on a glass or a gun, but the actual whorls and arches of the finger’s print. DeWitt is first introduced in Gran’s 2011 “Claire DeWitt and the City of the Dead” in which she solves the Case of the Green Parrot. In “Claire DeWitt and the Bohemian Highway,” she’s solving the Case of the Kali Yuga. The Kali Yuga is actually a fairly complex philosophical idea (don’t worry, she explains everything quite clearly). In this particular case, DeWitt’s ex-boyfriend, still very dear to her, has been killed, and she intuitively knows it’s not the botched breaking and entering suspected by the police. Gran’s series possesses a Philip Marlowe quality with both location and character—her first book took place in New Orleans, while the second is set in San Francisco. DeWitt delves into the seedier aspects of these marvelous cities while simultaneously trying to numb herself to the associated emotional trauma of old relationships. It’s not unlike her to interview someone and then slip into their bathroom and steal their pain medication, doping up on expired Vicodin and Valium.

While she’s solving her ex-boyfriend’s murder, she’s remembering one of the first cases she and her friend Tracy solved. Tracy becomes a mystery herself when she unexpectedly disappears from a Brooklyn subway station in the late 1980s. Before that, she and Claire made a great team, two like-minded disciples of Jacques Silette. They are trying to find a missing acquaintance—the rewards upon completion will be the staff discount at their favorite clothing shop. While it might sound trite, this early case is exemplary of the methodology that makes Claire the great detective she is. And in Gran’s hands Claire’s techniques are turned into pure poetry. When DeWitt writes down a missing victim’s breakfast, she remembers this: Pink clovers. Green horseshoes. Yellow diamonds. Blue Stars. Orange Moons. Purple Hearts.

In a genre where few heroines distinguish themselves from the crowd, Gran’s DeWitt is remarkably unique. What’s immensely interesting is that, even though the story is told from DeWitt’s point of view, we know very little about her. A casual scene that reveals DeWitt has multiple tattoos on her arms and back is almost shocking—until then the reader barely knows what she looks like. When other characters react to her as if she’s crazy or volatile we have the same reaction she does—don’t they understand that Silette’s method works?

Gran drops hints to other mysteries Claire has solved over the years with her mentor, Constance Darling. That older, elegant woman was something of a savior to Claire, and was murdered in New Orleans for reasons unknown. Tracy’s disappearance is unsolved and even Silette himself had a missing daughter. Fans of this very new series are likely to eagerly await inclusions of all these mysteries in future editions. But it’s not just a well-crafted mystery that’s going to hook readers on this fascinating series—Gran’s slender novels contain more than just unexpected tactics and an eccentric character. DeWitt is truly in the process of solving deeper truths. Feeling unlovable, she cannot love. Having lost her mentor, she can’t help the people that rely on her. The hardest thing for Claire to do is acknowledge her own worth. Gran’s Silette, like a wise, distant guardian, seems to understand this predicament all too well. “But for now, each detective, alone in the woods, must take her clues, and solve her mysteries for herself.” (Kelly Roark)