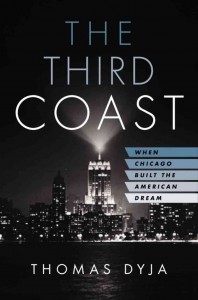 This is a love story. About a people. About a city. About a time. Postwar, pre-Daley, when Chicago was the hub of the nation, both culturally and kinetically. “Rail hub, air hub, manufacturing giant [Chicago was] the engine of America,” author Thomas Dyja writes. Like any good love story, the subject is sometimes talked about in overflowing terms.

Dyja was born and raised on the Northwest Side, and though he moved away as an adult, he expresses his love for his former city in the acknowledgements. The subtitle “When Chicago Built the American Dream” suggests its import with as much vainglorious self-importance of any proud native son. “The real struggle for America’s future…took place in postwar Chicago.”

The subtitle also suggests its end. Like Frank Lloyd Wright and Nelson Algren, like any son exiled to an outsider’s perspective, Dyja lavishes what it once was and criticizes what it could have been. By circumstances beyond its control or by the constitution of its people, the city by the lake is forever a tale of two cities, one of duplicity and contradiction, one of unwavering ambition and crippling parochialism. Like any good love story, “The Third Coast” is tragic.

Broken into five micro eras between 1945 and 1960, including one section hinged on the fracturing year of 1955, when the city turned its eye from the death of one son in Emmett Till to the rise of an airbrushed one in Playboy, Dyja chronicles the musical, architectural, literary, performance, political and televised confluences in Chicago. This era in Chicago birthed Mahalia Jackson and big-ticket gospel music, Mies van der Rohe and Modernism at the expense of Louis Sullivan, Moholy-Nagy and art by everyone, a footnoted artist whose mark was a mentality more than a piece of work; the Chess brothers and the threatening sexuality of Muddy Waters and Chicago blues; the rise and fall of self-imploding Nelson Algren, and the quiet fortitude and enduring place of Gwendolyn Brooks; the Chicago School of Television with its realistic tendencies toward intellectual entertainment with “Studs’ Place” and a puppet show known as “Kukla, Fran and Ollie;” the disparate seeds of The Second City brand of sketch comedy, and the homogenization of food and culture as McDonald’s and McCarthyism and Playboy pushed the free-wheeling explorations of art and culture into the safe and commodifiable. This two-faced city is home to the striking skyline and the divisive racist politics, where intended blight and gross income inequality sprawled in the shadow of a government so corrupt the people opted for patronage because everyone in Chicago is entitled to a little. Sometimes it’s hard to use the past tense.

Dyja presents a convincing case that Chicago in the postwar period held the American dream in its hand, molded it, impressed it, then let it be crushed by the safe and commercial, by the utilitarian and functional, by a pugnacious Irishman with a steady conviction. “For Richard J. Daley politics…was an expression of unbending will. Monuments are made with that attitude. So are dictators.”

If we have an inferiority complex now, Dyja suggests, it’s because this city before transcontinental jets and interstate highway systems had all the promise and gumption of any Chicagoan. If Daley is painted as the anti-culture bad guy, it’s only because Chicagoans needed someone to take control instead of all the fractions wresting for a piece of a political pie that served no one. We see the CHA, noble in its founding, stymied by intergovernmental counter forces, and we understand its dysfunction now.

Directing traffic at the intersection of culture and politics, Dyja the novelist at times struggles with his narrative tendency in the chronological coverage of an era. It’s fitting that this schizophrenic city gets covered in a thorough 400+ page book that Dyja, I suspect, could have doubled. The book enraptures with its narrative moments, like when Adlai E. Stevenson is groomed reluctantly for a presidential run, or when Mamma Till prepares Emmett for a simple summer journey that would instigate the Civil Rights Movement, or when Mies remains obtuse to his patron’s affections, ever the German. These scenes and more, capturing Algren and Simone De Beauvoir’s torrid and terrible affair, or Mahalia’s mindset entering into the biggest night of her career, are riveting but then get cut short by the demands of a linear history. We don’t get the consequence of these dramatic moments until later, if at all. Still, these vignettes are wonderful snapshots of the moment, society-page glimpses of the time turned into a storytelling mosaic.

The downside of having a hyperfocus with a broad lens shows up in sections where a dozen or more personalities are encountered in one paragraph. It’s easy to lose the moment.

Remember, this is a love story. Covering it all, getting all the nuance down, is impossible. Dyja is a novelist and a historian, but in “The Third Coast,” his second work of nonfiction, he is a Chicagoan. “… few things had ever been accomplished in Chicago for altruistic reasons.” A native says that and we nod; an outsider says it and we defend ourselves. Dyja knows it, and he knows the outside reputation and our ethos. There’s a sensitive balance with this dual audience.

This is most striking in the coverage of race. You can’t talk about Chicago without talking about white and black. Few histories have captured the racial complexities of Chicago so fairly and directly. Dyja never tends to the culverts of racial roads by justifying or apologizing. It’s not about fault but about actions. We get the racial tension happening, but we moreso get culture, commerce and art because of race, not in spite of it. When Leonard Chess sits in on drums for Muddy Waters it’s to make a buck, not to bridge racial divisions; when Mahalia comforts Studs it’s not about progressivism but humanity. The culture that arose from these racial tensions produced something wonderful, something we can take for granted now.

For Chicagoans, “The Third Coast” raises new awareness, the admonishment to know our history lest we relive it. As the awesome skyline rose, the people fled, and their connection to each other and this place broke. For the vast world beyond Chicago, this is a story of what might have been. For Chicagoans it’s the ongoing saga of what is. (Robert Duffer)