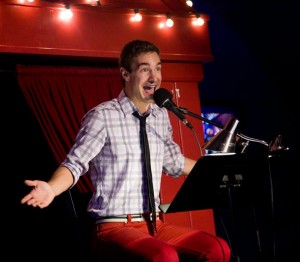 He’d had a long ride home from Chicago, performer Ozzie Totten explained during 2nd Story’s sixth annual PRIDE event. His friend’s dad, Harvey, was traveling for business and offered him a ride home to Minnesota, and Totten, at the time a student at Loyola University, saw it as a free and easy way to travel back home for winter break. Totten had identified as gay since age fifteen, grew up in an accepting atmosphere, and always felt welcome in his home, his community, his church. But on that car ride home, it became apparent that not everyone felt comfortable enough to be openly gay in their community.

As Totten took his shift behind the wheel, Harvey began to talk of his past visits to Chicago—to see his boyfriend. Before this, Totten saw Harvey as a happily married man, but he realized he had been holding a secret, and now Totten had no choice but to keep the revelation from Harvey’s daughter, with whom he was close friends, for fear of splitting their family apart. It placed Totten in an uncomfortable situation. He understood Harvey’s apprehension; he’d heard stories of friends being kicked out of their homes after coming out. But Harvey chose not to come out to his family for several decades. Reflecting on that car ride home, Totten now understands Harvey’s need to tell someone, anyone—to have his story heard.

Each 2nd Story show contains a diverse group of performers sharing their personal experiences. On the night of the SCOTUS announcement revoking DOMA and striking down Proposition 8, 2nd Story put on a Pride event entitled “Can’t Hold Us,” where three members of the LGBT community shared the struggles they faced. The night celebrated the advancements toward equality, but also reflected on the ridicule and resentment members of the LGBT community often endure.

At 2nd Story, the staff and audience encourage people from diverse backgrounds to share their experiences. As audience members were leaving the Pride event, Totten encouraged them to take a workshop and tell their stories up on stage. Bobby Biedrzycki, 2nd Story’s director of programming said, “To us diversity means everything from age to ethnicity to life experience.” Audience members also play a key role in 2nd Story’s events. Performers prepare and share personal experiences with the audience, then, during intermissions, audience members are encouraged to turn to one another and share the second story—their story—with one another.

After the Pride event Totten asked audience members to share what Pride meant to them. Many revealed personal experiences of loved ones who kept their sexuality hidden for fear of judgment; one audience member explained how his brother kept his sexuality a secret even on his deathbed.

In a previous 2nd Story performance, Dion Walton recalls questioning the preconceived stereotypes imposed on him at a young age. He remembers being mesmerized by Diana Ross on the television as a little boy, telling his mother he was going to grow up to be just like her. His mother’s response was that he couldn’t because he was a boy and she was a woman. “In the back of my mind, I said, ‘I’m going to show her.’” Walton says. Years later, Walton performed his first act as Diana Ross, and thus launched his forty-year career as a female performer.

During his 2nd Story performances, however, Walton does not need makeup or costumes—he simply tells his story. Totten explained the uniqueness of a 2nd Story performance: “I’m not putting on a character, I’m putting on myself.” With no props, just a spotlight, the stories are raw and real. “The moments the lights go down, it’s just me,” Totten said. “With 2nd Story, it’s the most true performance I’ve ever been allowed to have.”