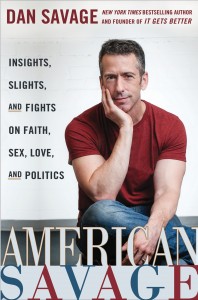 If the only time you’ve encountered Dan Savage is through his Savage Love sex-advice column or podcast, you’re missing out. Savage has always been a gifted cultural critic and philosopher, a side of him that doesn’t get to fully shine through all the talk about butt plugs. Some of his best work has been for the public-radio program “This American Life,” and excerpts from a few of those pieces show up in his new essay collection “American Savage: Insights, Slights, and Fights on Faith, Sex, Love, and Politics.”

Particularly moving are Savage’s meditations about family—the death of his mother, his relationship with his father, how gay parents with a straight son interact with the world. The essay that ends the book, “Bigot Christmas,” about the time Savage invited Brian Brown, head of the National Organization for Marriage (a traditional marriage organization), over for dinner and debate, is both a remarkable scene and exposure of the other side. Part of the shtick is the set-up: gay man invites bigots over to his house for dinner, but the attention to detail— how Savage’s husband Terry takes the news, dusting the baseboards, making the drinks—makes the essay feel incredibly full and present. In all the pieces, there’s a realness to what’s said. You can discern how Savage’s mind works by the witty interjections spicing even the most offhanded remarks. He’s widely read and has an incredible vocabulary, making him effective both on the page and on the mike.

Ultimately, the collection doesn’t feel fully honest and as well-written as it could be, sometimes sacrificing quality for the cheap shot. Had Savage stuck to straight narrative, “American Savage” might have the richness of a classic, but as his opponents might say, it’s just another example of Savage’s agenda. He rattles off statistics about issues such as health care and continues to bash Rick Santorum and Republicans. A reader of liberal persuasion just encountering Savage will probably like him—goodness knows that his points are valid, his targets make themselves easy and are, at least to this reviewer, deserving of ire—but if you by chance are a Savage fan, he’s not saying anything new. While you’ll hear what he really thinks, you might not keep listening. Thus, “American Savage” comes off as an unwieldy mix of journalism, the heartfelt tale, and rehashed opinion. Read it anyway—it’s entertaining enough. (Liz Baudler)