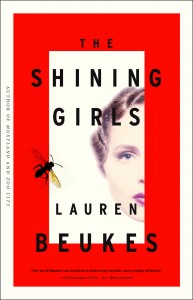 When Harper Curtis happens upon a set of keys that unlocks the door to the House in 1931, he is not just gifted with a shelter from the cold Chicago streets, he is burdened with the power of time travel, and a wall of objects that call to him with an incessant humming. These items belong to the book’s namesake, the Shining Girls, women in Chicago who shine with potential. Using his power of time travel, he is able to visit each woman at different points in time, gifting them with items from different decades to remember him by, and waiting for the right moment in time to violently murder them and make the objects hum less and less. After each murder, he is pulled back to the House in 1931, to listen to the hum of the objects and plan for his next attack or visit the aftermath of each murder. He relishes in his clever practice of leaving mementos from his other victims on each woman’s body, creating a jigsaw of evidence that would be impossible to put together if it wasn’t for Kirby Mazrachi. Harper attempts to murder her in 1989, but she becomes the only one of the Shining Girls to survive his brutality. Kirby is left with a puzzling antique knife, a map of scars, and a burning desire to find and trap in time the killer who tried to snuff her potential. With the help of Dan Velasquez, a former homicide reporter who covered her case, she slowly starts piecing together the murders.

I made the mistake of  reading “The Shining Girls” over lunch. Lauren Beukes uses gruesome, vivid imagery, especially when describing the violence Harper inflicts on his victims, who also often publicly masturbates at the scenes of his crimes. When writing from Kirby’s perspective, the detail is focused on the clutter of her life—boxes of recovered case files, strewn clothing across the floor, mismatched outfits. The clutter matches what her life  becomes after the attack. Beukes is masterful at building characters that are the sum of many details—setting, appearance, mood, etc.

The time travel is employed subtly, and doesn’t force the reader to suspend their disbelief for very long. The year to which Harper is traveling is displayed at the beginning of each chapter, but even without the indication, the worlds Beukes builds in each section are convincing on their own.

“The Shining Girls” is a visceral read. Readers will find themselves willing to be dragged through time with Harper. The spot-on choice of detail and characterization proves that Lauren Beukes is a shining girl herself. (Courtney Kazmierczak)