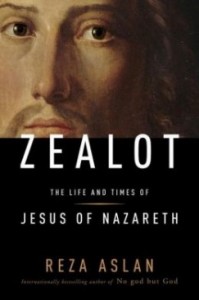 Atop the nonfiction bestseller list is not a celebrity drug or divorce memoir, but a biography of Jesus Christ written by Californian Reza Aslan. “Zealot: The Life and Times of Jesus of Nazareth” portrays Jesus as an angry Jewish revolutionary. Attacked by Fox News and hyped by Random House, the book makes an old argument with the new hook that the author is a youngish “nominal Muslim” of Iranian descent with a University of California doctorate in the sociology of religion and an Iowa Writers’ Workshop MFA in fiction. The result is a well-researched page-turner placing Jesus in a corrupt Middle East, where the specific Jewish dynamics, the author claims, have been blurred by centuries of Christian hagiography.

Drawing on the historical Jesus scholarship promoted by Catholic University’s John Meier and DePaul University’s Dominic Crossan, Aslan argues the prophet was an illiterate revolutionary with a passion for the poor and hatred of the temple priests. Overturning the money changers’ tables thus makes the “prism through which his entire ministry must be read.” In the cauldron of Judaean politics, some of Jesus’ most famous sayings have been twisted to mean the opposite of what he did. “Render unto Caesar that which is Caesar’s,” is no law-abiding codex, but rather a rousing call to buck the empire.

An activist, angry Jesus would explain well some anomalies in his turbulent last days, in which overturning the money changers’ tables does seem a bit out of character in the original Gospels. Probably his surviving followers did divide into two camps, as “Zealot” claims, one pro-Jewish led by Jesus’ brother James, and the other pro-Gentile, led by Paul. In the devastation of Jerusalem in the failed rebellion in 70 AD, it is quite conceivable that much of the original Jewish context of Jesus’ ministry was lost.

What “Zealot” loses, as does much historical Jesus scholarship, is some of the deeply ironic, layered nuances of that ministry. If Salome was not forced to dance for Herod (no Jewish princess would be asked to do so by her mother, Aslan avers), we lose the court’s ironic decadence in which one man’s lust dictates he must behead the prisoner he fears most. If the Jewish priests would never try a common zealot in the middle of the night, as Aslan offers, we lose the lawless rule in a city seething with angry pilgrims as powerful men seize a quick, easy way out. But the priests are not that powerful. They must bring their problem to their own higher power. Whether Pilate really did ask those wonderful ironic questions familiar to any “Jesus Christ Superstar” or “Godspell” fan, no one knows.

We’ll also never know if Mark or Luke wrote those gospels, or whether there was the weirdness of the resurrection itself. By avoiding unanswerable questions, Zealot succeeds in what it sets out to do. It offers an earthier, more engaged, but perhaps less interesting man than the one we thought he was. How did this obscure, poor son (forget the virgin birth) who preached for only three years, appeal to millions of oppressed peoples through time? Was he a son of God or of man, and what does that mean?

Those mysteries, happily, remain for the reader to ponder. (Ted Anton)

“Zealot: The Life and Times of Jesus of Nazareth”
By Reza Aslan
Random House, 336 pages, $27