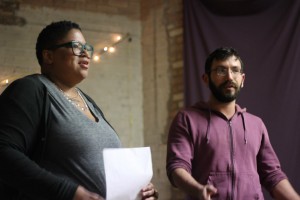 Nearly a year ago, writers Keith Ecker and Sam Irby created the literary series Guts & Glory to give authors an environment to try out their newer, riskier writing. “While the [live lit] community had really flourished, I noticed that there wasn’t a venue for artists to share their most vulnerable works. I personally had topics I wanted to explore in my writing that I knew would push the envelope of what would be considered acceptable at a lot of shows,” Ecker says.

If starting a live literary series is the thing to do these days,  what sets this one apart from the rest? First of all, the environment. The series takes place once a month in what Ecker calls the “barebones venue” in the back of Powell’s Bookstore. Christmas lights are hung along the exposed brick wall, creating a raw, intimate environment for the readers and its audience. “We aren’t about big production value. We’re about that connection between the artist and the audience in its purest form. And because of the incredibly supportive atmosphere that Sam and I have fostered, our artists feel comfortable being incredibly vulnerable and our audiences are eager to listen,” Ecker says.

Here, writers can tell their stories with authenticity, which in turn opens a conversation between the writers and the audience. For Ecker, a sign of a successful show is when audience members approach the writers and tell them how much a story related to their own experiences. “It proves that the human condition, in all its forms, is universal,” Ecker says. Irby claims that the small space creates a bond between the writers and audience. “I feel like the audience sort of feels a kindred spirit with whomever is onstage. They reward the performer’s risk. Everyone is on his side, for those ten minutes,” Irby says.

Irby jokes that her two prerequisites for implementing the show were as follows:
1. Established performers who we already know are jamming onstage, and
2. NO BORING SHOWS EVER.

As curators, she and Ecker make sure every show bears no resemblance to the previous ones. “It is never the same—not ever. Each month the energy in the room is alive in a totally different way than it was the month before,” Irby says.

Irby and Ecker consistently push the content into new territory. “It is really the embodiment of laughing (or crying and holding each other) through all of the things in life that are too horrible to say, but have to be said anyway,” Irby says. (Kathleen Caplis)