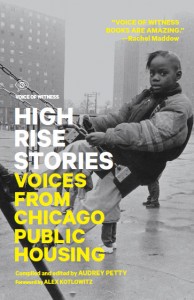 Growing up on Chicago’s Northwest Side in the 1990s, I heard plenty of stories about the city’s projects. The tales were passed down like a game of telephone, the storyteller and audience never really knowing what was fact and what was fiction. My mom told me about former Chicago mayor Jane Byrne’s brief and failed attempt to combat gang violence by moving into Cabrini Green. How the mayor slept under a mosquito net to keep the cockroaches from crawling into her bed. My grandma recalled days long gone, when one or two of her Irish and Italian friends called Cabrini Green home. My dad, who had worked in the Cabrini neighborhood and checked the pipes in one of the high rises, said he remembered the cockroaches the most. “They were at the doorstep, before you even stepped inside the building,” he said. That and the neighborhood convenient stores sold year-old expired baby formula.

For better or worse, Chicago is a city of neighborhoods, and what that often means is that residents don’t leave the eight-block radius that surrounds their home. This was the case for me as well as for many of the project residents interviewed in “High Rise Stories,” a collection of eleven first-person narrative accounts about residing in Chicago’s public housing system, from McSweeney’s Voice of Witness series, edited by Audrey Petty.

The high-rise towers of Cabrini were roughly eight miles from my childhood home in Jefferson Park. Still, other than in these recycled legends and on the evening news, Cabrini and the city’s projects like Cabrini didn’t really exist to me. Like many Chicagoans, I was completely disconnected from the projects and the neighborhoods that encompassed them. Former Mayor Richard M. Daley didn’t even comprehend the physical makeup of an average Chicago Public Housing (CHA) unit. In the introduction to “High Rise Stories,” Alex Kotlowitz, the author of “There Are No Children Here,” points out that during a press conference regarding CHA’s outstanding water bills, Daley suggested that residents pay for their showers. Most public housing residents didn’t even have showers, only baths.

I was a teenager before I realized that places like Cabrini were home, when I had finally started to venture out of Jefferson Park. At sixteen, I started working at the DMV as a seasonal student worker. A few of the other high school and college-aged students I worked with, along with a few permanent employees, had lived in various high-rise projects throughout the city. One day, I saw a man in front of the Garrett Popcorn shop on Randolph. He was wearing a white t-shirt with an airbrushed picture of the Robert Taylor Homes. The shirt included a picture of the building in which he once lived. I remember naively asking one of my co-workers why someone would wear a shirt like that with such pride. Why would someone be proud of having lived in the projects?

In believing the stories of outsiders, I had forgotten that the projects were home to thousands of Chicagoans. I would never have questioned someone’s own pride and appreciation for Jefferson Park—my neighborhood, my home. Why was I questioning this stranger’s? In believing the media’s depictions of the projects as only violent, ruthless, isolated, drug-infested places, I had forgotten that, like any place people call home, the city’s projects were far more complex than that. They were communities. Ultimately, this is what “High Rise Stories” succeeds in proving by giving former residents a platform to tell their stories.

“High Rise Stories” is not a game of telephone. It is not an outsider’s account. A variety of personal factors including age, community, current occupation, and feelings about growing up in Chicago’s projects make each of the book’s contributors unique. The narratives especially flourish when the contributors give detailed and personal accounts of life in the projects that don’t involve drugs and violence. Dawn Knight, a forty-eight-year-old college student and ordained minister who grew up in the Robert Taylor Homes, describes how she and her friends dug through the project’s incinerators for stereos and component sets. How they went door-to-door and asked neighbors for roach spray because they couldn’t bring anything inside the house without first spraying it down. Lloyd “Pete” Haywood would walk from Stateway Gardens to a special marina near McCormick Place that he and his friends dubbed “Rabbit Town.” Fifty-three-year resident Dolores Wilson’s husband led the drum and bugle corps to twenty-three trophies without even having proper uniforms. These stories constantly reminded readers that childhood occurs everywhere, even in the city’s worst neighborhoods, amongst the most unbearable living conditions.

Over the five summers I worked at the DMV, I came to realize that my neighborhood and the neighborhoods many of my co-workers had resided in were more similar than I thought. Listening to my co-workers recall the chicken at a former Cabrini restaurant, Farmer Brown’s, reminded me of the flamingo ice-cream cones and fried mac-and-cheese nuggets of my own neighborhood’s beloved (and now closed) hotdog stand, Toots. Many of the other college- and high-school-aged summer workers and the children of the full-time employees were the first people in their families to ever go to college, just like me and many of my own neighborhood friends.  Each summer I worked at the DMV it became more and more clear why that man next to the Garrett Popcorn shop would’ve worn that t-shirt with such pride. Race and class and zip codes may have divided us but we were all Chicagoans, not one of us less valuable a resident than the next, no matter what our politics and media said or wanted us to believe.

At some point, each of the eleven narratives in “High Rise Stories” depicts the true essence of a traditional Chicago neighborhood—a place where people look out for one another, where a set of rules, no matter how backward, are followed and viewed as the norm, where cousins and aunts and uncles and grandparents grow and live side by side, where families reside for generations.

Each narrative is also a testament to how life in the projects and the surrounding neighborhoods were nothing like life in neighborhoods like Jefferson Park. “High Rise Stories” never ignores the danger of project life and poverty, or the emotional scars and nightmares it left: heroin and cocaine addictions, predatory men who see a single mother and her children and take advantage of both, prostitution, teenage pregnancy, dodging snipers as you walked out of your front door. For every story about kids constructing stereos, kicking back at the marina, and marching in the Saint Patrick’s Day parade with the drum corps, there are ten stories of hardship.

Like many of us, the contributors to “High Rise Stories” have a complicated relationship with the place they call home. As Cabrini’s Dolores Wilson said, “I don’t care what neighborhood you’re in. I don’t care if it’s a diverse area or what, after a while you get to love and know your neighbors and everything and get along. That’s the way it was with me and the fourteenth floor.”