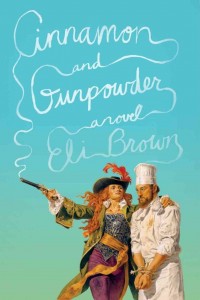 When world-class chef Owen Wedgwood is abducted by Mad Hannah Mabbot, an infamous pirate queen, he clings to what he knows—food. It’s knowledge he needs for survival. He’s forced to cook a meal for Mabbot every week, and join her as she dines. He’ll only be spared if he keeps her happy. During their weekly meals, they talk about their pasts. Soon, Wedgwood is drawn into her search for a famous thief called the Brass Fox and her war with the Pendleton Trading Company.

The story is told through Owen Wedgwood’s diary. In his first entry, he is already a prisoner on Mabbot’s pirate ship. Fortunately, he has paper for his diary because he requested it to write down recipes. In addition to recording what transpires, Wedgwood also jots down lists of food and his ideas for meals, among other asides.

When Wedgwood is first abducted, he finds the bleak and bare kitchen depressing, taking stock of the hard moldy cheese and gunpowder-cured mystery meat called Mary Sweet. In his quest to gather more ingredients for cooking, he encounters characters and action that work to propel the plot forward. Wedgwood is forced to mingle among the ship’s crew to obtain some of the fish they catch. He also obtains spices and other cooking materials when Mabbot’s  pirate crew captures other ships.

This is a dangerous book to read while hungry. Wedgwood’s passion for food is evident. He often describes dishes with poetry that might otherwise describe a forbidden lover or a heavenly god, such as this:  “I had removed the fillet from the pan while it was still glassy in the middle and it continued to cook by its own heat and a gentle flake. Between the opaque striations, wisps of fat clung to the crisp potato breading and resolved upon the tongue like the echo of a choir surrendering to silence.”

The characters are unique, but they take time to marinate. When all the characters are first introduced in the book, they appear to be the stockpile of sorts you’d see in any pirate novel. As the book unfolds, these characters become much more than stock personalities. Hannah Mabbot has a tender heart that cares for her crew and babies a pet bunny she keeps in her cabin. Owen Wedgwood is a man that is fiercely loyal, and has known the loss of a family. And Mr. Apples, Mabbot’s second-in-command, is a caring individual under the rough exterior who knits the best hats and scarves on the ship.

The story can be a bit moralizing. A major factor that spurs Mabbot and her crew to battle the Pendleton Trading Company is the injustice being perpetrated by the Company against poor villagers in China for opium. While Mabbot generally sounds sincere about the plight of the downtrodden, her rants about the Trading Company and the blind, ignorant masses are exhaustive. Other injustices and rants follow, about closeted gay sailors, about the abuse of women. If it was Brown’s agenda to educate, it comes a bit heavy-handed.

“Cinnamon and Gunpowder” isn’t a serious read, and it isn’t suppose to be. It’s like chocolate and white bread—a guilty pleasure to indulge in. (Sarah Cubalchini)