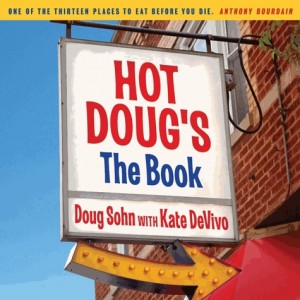 In his foreword to “Hot Doug’s: The Book,” the half-history, half-scrapbook of Chicago’s most famous hotdog stand, Graham Elliot suggests that Hot Doug’s serves up “edible punk rock.” True to form, the 230 glossy pages that follow are full of the brash DIY aesthetic that any of Doug’s diners know so well. Written by owner Doug Sohn with Kate DeVivo, “Hot Doug’s: The Book” is a fun and often fascinating history of the stand entwined with stories, photos and memories from his vast and loyal community of friends and fans.

Happy to be the face of his restaurant but far more modest when not behind the counter, Doug had been approached to write books before but always declined. “They were always cookbooks or a straight history of the restaurant, which seemed insubstantial. Like, ‘Oh, there’s four pages that even I wouldn’t read!'” he told me over the phone. It took some prodding and nudging from DeVivo and her husband to get him to agree this time around. “Matt [Green, DeVivo’s husband] does social media for a living and he suggested tapping into our following and doing a book with customer contributions, from the perspective of not just me, but what it means to everybody else as well. And I thought, ‘Yeah. I can see that being a book.'”

He set up a series of interviews with DeVivo, who wrote the bones of the book and then together they sat down to edit and fill in all the blanks. At the same time, through Hot Doug’s social media pages, they solicited fans of the restaurant to send in their stories, memories and photographs. They were inundated. When all the collecting was done, Doug closed the store for a few days and sat down with DeVivo to write. “I really loved that,” he says of the writing, “It was new and different, just sitting down and writing. The physical and mental exercise of doing it was fun.” The fan contributions were a slightly different story. “Reading the contributions, not fun,” he laughs. “I am incredibly flattered and incredibly humbled by all of it, but it makes me anxious!” The customer perspective contributes far more to the book than just some funny anecdotes and great pictures. It lets the reader see Doug in the shining spotlight he deserves but is so reluctant to train on himself.

Some contributions jogged his memory, especially tales from the old location that had simply slipped his mind. He also went through old boxes of newspaper and magazine clippings, memorabilia and just general junk. “It was sort of like going through a scrapbook. We’d find things, like the mementos from the first store, things that were on the counter or other weird pictures and think ‘Oh, I forgot about that!’ and ‘Look how young we looked!’ There were things in those boxes I hadn’t looked at in nine, ten, eleven years so that triggered more memories and customers and so forth. And then we’d go back and fill in the blanks on those early years.”

Doug’s fierce pride in his little hotdog stand shines through every page of the book, every photograph and memory. He’s iconoclastic in the best of ways, dedicated to personal and personable customer service as well as to the many varieties of deliciousness that come in a tubular form. That single-mindedness, above all else, is what built the following so vividly on display. “So many places and so many restaurants of my ilk, the small fast-foodish places, are usually very sterile and robotic, and we’re not that. We really try to focus on real customer interaction, where I’m talking to you. I understand the line can be really long, but once you’re up at the counter I’m going to talk to you and no one else exists.” He pauses, and thinks for a moment, then adds, “I also like to think the food’s pretty good. I think if the food stunk, it wouldn’t matter how nice we were.”

The food decidedly does not stink. “Hot Doug’s: The Book” features tantalizing glimpses into the history of Doug’s menu, how it’s named (hint: there are lots of themes), and how the revolving cast of sausages is decided upon. A hotdog, it turns out, is not simply a hotdog, and that is likely why Hot Doug’s is not simply a hotdog stand. When I asked him if my hometown dog might ever make it on his menu (I’m from Washington DC, home of the half-smoke), he hesitated. “We’ve toyed around with [regional specialty sausages] but I’m not a huge fan of trying to really duplicate another city or region’s quintessential food because it never works. It’s because it’s the water, the air, it’s the person doing it, the atmosphere, and really that has a lot to do with it.”

This might go a long way to explaining why Hot Doug’s Chicago dog is so spectacular and why it’s still Doug’s favorite thing on his own menu. “I love it,” he gushes. “To me that’s still why I opened the restaurant. I love all the other sausages, nothing gets up there unless I love it, but it’s still the Chicago hotdog. When done well, it’s the best.”

When you get Doug talking about these tubular treats—in the book or on the phone, it makes no difference—you can hear his voice shift. He is always enthusiastic, but a sparkle of joy comes into his words. You can understand why he has resisted lucrative franchising offers or opening a second store; he simply cares too much to not be completely personally involved. He has continued to bullishly pave his own way and do his own thing, to build his own empire. It is a small, kind of cramped empire that is garishly bright and covered in hotdog-themed kitsch, with a long line out the front door no matter the weather, but it is clearly his empire. That is ultimately why any of us wait in line for a hotdog and fries, and it is ultimately why Hot Doug’s deserved the book it got: oversized, glossy, filled with memories and emotions and people, not just sterile facts.

As with all empires word of Doug’s work travels far from its home. Last night I was chatting with my sister, who is coming to visit me for the first time since I moved to Chicago a year ago, about what she might want to do on her visit. “There is only one thing that I absolutely have to do, that I cannot leave Chicago without doing,” she said, in that overly emphatic tone sisters have. “I want–I need–to go to Hot Doug’s. That is all I want to do.”