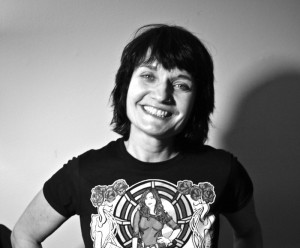 Janice Deal’s debut, “The Decline of Pigeons,” is a short-story collection about broken people amidst the turmoil of loss, from a woman trying to rebuild herself after losing her arm to a man haunted by the memory of letting his daughter be bitten by a vicious dog.

Even though Deal was always interested in writing, it took enrolling in Fred Shafer’s Adult Continuing Education writing class at Northwestern University to start pursuing her fiction. When Deal received an Illinois Arts Council Fellowship for Prose, she took a sabbatical from her day job and went to Paris to focus on her writing. Ever since, she’s been publishing short stories in literary journals like The Sun, CutBank, StoryQuarterly, and The Carolina Quarterly. “The Decline of Pigeons” was selected as a finalist for the Flannery O’Connor Award for Short Fiction.

What was your writing life like before Fred Shafer’s writing class?
I became a writer once I had lived awhile and could draw upon life’s experiences to find my voice. I loved writing poems and stories when I was a girl, but drifted away from writing during high school and college because I felt like I didn’t have anything to say. In fact, I dropped out of a writing class in college because even though I was getting a good grade in the class, my writing felt forced and hollow to me. But I returned to writing in the 1990s, years after I had graduated from college and really lived a little. Author Laurie Levy helped me understand how life’s challenges, discoveries and joys were providing me with something to say through writing and, by 1993, I had written and published one short story, “Cancer,” prior to joining Fred Shafer’s class. Fred would end up confirming what Laurie helped me understand.

What did Shafer’s class do for your writing?
I found Fred’s adult continuing education class at a time when I was rediscovering myself as a writer and a student. My becoming an editor at WHERE Chicago magazine in the late 1980s would play a pivotal role. In 1991, WHERE paid for me to take a continuing-education journalism class at Northwestern, and through the class, I realized I enjoyed the challenge and stimulation of being back in school. Since I was starting to receive encouragement to write fiction from people like Laurie Levy, I decided to try Fred Shafer’s fiction-writing class once the journalism class wrapped up. Right away, I loved the rigorous, thoughtful approach Fred takes to writing. His classes involve extensive reading, and there is such a multi-disciplinary approach to the way he presents material. For example, Fred loves music—he has an encyclopedic knowledge of it—and he draws parallels between the rhythms in music and sentence rhythms. After the Northwestern class ended, Fred invited me to participate in a short-story writing workshop he hosts at his home. I was so pleased! Fred helped me develop and refine my voice.

Why did you choose Paris?
My husband David and I knew we wanted to go abroad. Paris, with its rich artistic life (museums! bookstores!) and dash of the macabre (cemeteries! catacombs!) drew us the same way it seems to have drawn Hemingway and his expatriate cronies decades before. And of course the whole Hemingway connection delighted me.

How did “The Decline of Pigeons” come together?
“The Decline of Pigeons” reflects years of methodical writing, rewriting and finding an audience through literary magazines. The stories originated in Fred’s workshop—written at the rate of roughly one a year, then followed by revisions that sometimes took years to complete. When I felt a story was ready to consider for publication, I’d send it out and endure the rejection that all writers experience. But some of the stories eventually started getting published in literary magazines. As more stories found a home, I started to think seriously about them appearing together in a book. The stories are connected by a theme of loss: my characters are flawed but hopeful, exhibiting the bravery that profound loss demands. I hadn’t written them with any particular unifying theme in mind, but that’s how they took shape.

Story collections are notoriously difficult to get published. What challenges or setbacks did you face?
“The Decline of Pigeons” became a reality because of one person with vision and a belief in short stories: Queen’s Ferry Press Publisher Erin McKnight, who has staked her claim among the indie presses by actively seeking short story collections. Erin and I connected in early 2012. I am so grateful to her for giving my stories a chance, and then giving them a home. Until we found each other, I had struck out with my efforts to send the collection to numerous agents, and publishing houses large and small. I got many form rejections, and some genuinely nice personal notes that praised my writing but then bemoaned the fact that short-story collections were too much of a financial risk.  One small press enjoyed my writing but ultimately turned the collection down because it was too “depressing.” Then I met Erin. 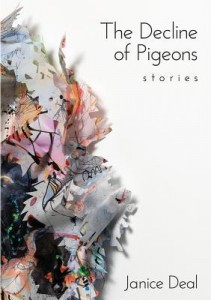 In “The Decline of Pigeons,” the woman who suffered the loss of her arm and the woman whose face was burned beyond repair are some of the more unique characters, written with strong technical information about their injuries. What kind of research did it take to write about these characters?
Many of my stories have taken shape in the book-filled rooms of libraries. When I was a librarian at DePaul University, I had access to all sorts of reference materials that helped me research some of the stories, including “Phoenix.” I’ve always loved libraries, and even though I left DePaul years ago, I still spend a lot of time in them—either alone or with my daughter, who is also a big reader and writer. In fact, my daughter and I have “library dates”! Once I hit upon a topic I’m interested in incorporating in a story, such as how a prosthetic arm functions, I just start reading voraciously on the topic. I use books and the Internet both.

One story was titled “Phoenix,” one story used the idea of pigeons, and there were several stories where we see owls in the form of a stuffed animal or decoration. Do you find birds particularly interesting?
I do like birds: the freedom they represent, their diversity, and their beauty. When my husband David and I first moved into our home, my parents got us a bird bath as one of our first house-warming gifts. My personal passions have a way of cropping up in my work: our family has three adopted cats at home, and cats appear in the novel I’m writing.

The locations of your stories seem to be places that you’ve been, such as Paris and Chicago.
I draw upon places I know for inspiration even if the settings for my stories are fictional. For example, Candy’s neighborhood in the story “Aurora” is a suburban subdivision inspired by midcentury, Midwestern subdivisions I know (even though the actual location is made up). And in “Nature,” two principal characters Feldon and Nikki visit a neighborhood carnival, a setting I created by drawing upon elements I’ve seen at local festivals, including the people, the food, and the games.

What types of sights, people, or locations inspire you to write?
Oh, I do love the underdog! I’m fascinated and delighted by the people and places that exist on the fringes: whether it’s the little second- and third-tier amusement parks that struggle in the shadow of Disney World in my story “Dinosaurs,” or the person who doesn’t quite fit into the mainstream, like grieving, tchotchke-collecting Sunday in “Six Foot.”  As my husband David said once, “It’s more interesting to draw a picture of a beat-up tennis shoe than a shiny-clean new one.”

What’s next?
I am working on a novel about a woman who returns to the small town where she grew up, in response to a family crisis. I’m also researching a fiction project that will likely incorporate elements of string theory. String theory has been called “a theory for everything,” a way to describe all fundamental forces, which appeals to me as a basic unifying element for characters searching for their reason for being. A close friend of mine introduced me to string theory through a book he was reading. It just goes to show that you never know where your next idea may originate. I am blessed with family, friends, and books.