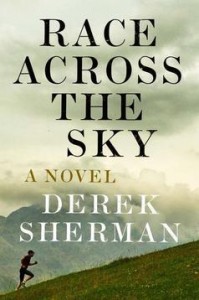 You’ll be running through the chapters of Derek Sherman’s debut novel “Race Across the Sky.” An addicting read, the “Race Across the Sky” unveils the effort of two estranged brothers to save the life of an infant suffering from a terminal genetic disorder. Both find themselves risking everything they have in a poignant story about conviction, family and what it means to sacrifice one’s life out of love.

It would be a shallow conclusion to say this novel is about running. It is merely a context that is naturally beholden to the theme of sacrifice. “Race Across the Sky” aligns two radically different worlds: ultramarathoning and corporate pharmaceuticals. Ultramarathoning, an extreme sport that requires runners to race distances well over the standard 26.2 mile marathon, is the niche culture from which Shane, a new father and salesman for one of America’s most powerful biotech companies, wants to save his brainwashed brother Caleb. Ten years previously, Caleb had left his Manhattan consulting job to join Happy Trails Running Club, an ultramarathoner commune outside of Boulder, Colorado, lorded over by one of the sport’s most notorious gurus, Mack. A wiry, bearded and uncanny crackerjack of a man, Mack’s personality attracts runners from around the world to train under his draconian but grandmaster tutelage.

After years of minimal contact, Shane receives a letter asking him to visit Caleb at the retreat where he’s introduced to the ultramarathon world that consumes Caleb and those who have also become addicted to the need to run. Physical purity, mental transcendence, tapping into a kind of athlete’s samsara through the pain of running up and down 13,000-foot mountains: these are the benefits of ultramarathoning that its junkies use to explain they’re not crazy. And outside of their small community of enthusiasts, they have to do that frequently.

When Caleb introduces Shane to his lifestyle—which includes six-hour daily runs, a perfectly engineered diet, reiki and hash healing circles, all strictly coordinated by Mack—he also introduces him to a secret he’s been hiding. Against Mack’s code of no emotional relationships within the house, Caleb has fallen in love with a woman whose child was born with Alpha-1 Antitrypsin Deficiency, a rare genetic disorder with no cure. The newborn has only years to live. Shane returns home to his pregnant wife and connives a plan to force his brother to leave Happy Trails, but it’s at this point that the story begins to unravel at a pace that will keep your heart rate up.

Sherman, the creative director at Cramer-Krasselt here in Chicago, wrote the novel over an eight-year period on his train commute from Lake Forest to the Loop. “I didn’t know I was writing a book, I was just writing down a story,” he explained in an interview. For the author’s first piece of fiction, the story has moments of masterfully crafted conflict and an extremely creative introspection into worlds most know little about: ultramarathoning, pharmaceutical politics, Alpha-1 Antitrypsin Deficiency and the broadly expanding horizon of biotechnology, the practice of engineering an organism’s natural biological makeup, like DNA, to produce controlled artificial effects. So why place a story about love, sacrifice and corporate politics in the context of ultramarathons? “The story began with this image in my mind of a man running across the country with a baby on his back,” says Sherman. “But why write about ultra? It’s such a dramatic world that is very difficult to understand. I like to write about what I don’t know. I wanted to know that kind of will power and overcoming of pain. It’s in a sense metaphoric for our society, where it’s a game to take anything and make it extreme. Everyone is working harder, pushing themselves further. And I was interested in the good that can come out of it, both in biotech and ultramarathoning.”

How the disparate lifestyles of the main characters collide when these two worlds are brought together is what makes “Race Across the Sky” such an entertaining read. How love must be found through their sacrifices makes the story an endearing read. You’ll enjoy the emotional race he’s designed.   (Charlie Puckett)

Our book club read this and we all loved it. Not all of us run but we all loved it. I recommend it to anyone who loves books that make you feel, question your own choices, but is still fast paced and fun to read. Thumbs up.