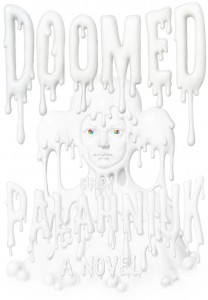 In researching for his trilogy of books, loosely structured on Dante’s “Divine Comedy” and potentially considered his first foray into young-adult literature, “Fight Club” author Chuck Palahniuk drew upon Jean Paul Sartre’s play “No Exit” for inspiration. The play, itself an existential precedent to the John Hughes’ film “The Breakfast Club,” is the source of the quote “Hell is other people;” easily the central theme of the trilogy’s first book, “Damned.”

In “Doomed,” Palahniuk returns to the metaphysical odyssey of thirteen-year old Madison Spencer (deceased), and finds that, like with hell, other people are what make purgatory as well. Back on Earth as a ghost, Madison finds herself caught up in the plots and machinations of ancient super-nature and good old human selfishness. Satan’s on the move, like he always is, to bring the inferno to Earth, all the while assuring Maddie that she’s not only a part of his plan, but the whole of it. And being a ghost who can visit the living isn’t that great, as the poor girl’s ludicrously liberal-elite parents are just as insufferable as ever. Even dead grandma turns out to be a downer. Can Madison save the world from infernal retribution? Does she want to? Should she really?

What’s interesting in Palahniuk’s latest direction is that with “Damned” and” Doomed” (and the pending conclusion “Delivered”) he’s made a major leap from his usual style of literary minimalism. Written in the voice of blog-esque communiques from Madison herself, the chapters manage to capture the voice, rhythms and attentions of a smart-yet-inexperienced thirteen-year-old in the twenty-first century. (Mostly. There are instances where the author attempts to use and construct Internet slang that sticks out more than it smoothes over. Then again, actual contemporary internet slang also sticks out and doesn’t smooth anything over, so in that sense it at least serves the thematic intention if not the narrative immersion.) Despite this, “Doomed” presents a potent new voice for Palahniuk’s writing, and may open him up to new readers, with both the meta-realist scope of the plot and his remarkably engaging heroine. (Greg Baldino)