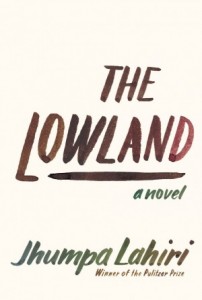 Jhumpa Lahiri’s new book, “The Lowland” begins in Calcutta. Two brothers live near two ponds—during the monsoon the ponds flood and become one. The brothers’ lives are intertwined. They are intellectual equals and beloved by their parents. Udayan is the boldest, but Subhash, the first-born, musters the bravery to join him in their childhood adventures. Udayan becomes a rebel and a revolutionary, while Subhash becomes an intellectual. While one brother becomes more extreme, the other settles into isolated university life in the United States.

Lahiri explains at great length the Naxalite movement that rose in India in the late 1960s to seventies. The movement began with a rebellion of peasant sharecroppers who rose up against unfair landowners. It was supported by students like Udayan who promoted Maoist ideology. The Naxalites were considered terrorists by the Indian government and members were often tortured if captured. Udayan is shot and killed by the police in the lowland while his parents and new wife watch. After losing his brother—the yang to his yin—Subhash returns to India and rather compulsively convinces his brother’s widow to return to Rhode Island with him. The woman, Gauri, is not safe in India and his parents clearly dislike her. She’s pregnant with his brother’s child.  Together, they raise the child, but choose not to tell her about her origin.

Lahiri tells the story of Subhash in her trademark minimalist prose, with few embellishments. Moments when she succumbs to poetry are all the more beautiful for her reserved style, such as how Gauri perceives time: “She had been born with a map of time in her mind. She pictured other abstractions as well, numbers and the letters of the alphabet, both in English and in Bengali. Numbers and letters were like links on a chain. Months were arrayed as if along an orbit in space.” Her sparseness of prose doesn’t equal scarcity of detail—she goes to great lengths to describe the disappointments of an academic, the feelings of an anxious mother, the topography of a delta.

In this careful unraveling of a family rocked by tragedy, it becomes evident that Subhash’s actions were not as high-minded as they appeared. Motivated, at least partly, by self-serving instincts, he fails to recognize his wife’s independence from himself, their child, or even his dead brother. Gauri’s intellectual pursuits aren’t taken seriously by her milquetoast husband, who looks to her primarily as a wife and mother. In the slow reveal of their relationship, neither party is “good” or “bad.” In a very real way, they imitate that all-too-human propensity toward nothing more than utter self-preoccupation. This mirrors the struggle that Subhash and his brother faced—whether the self is responsible for its own liberation, or whether the collective society should support the individual’s freedom.

“The Lowland” follows Subhash from childhood to old age in eight parts. The break between parts comes as some relief to the slow pace of the erudite story. Each part can almost be enjoyed as a short story, of which Lahiri is a master. As Subhash gets older, Lahiri suddenly skips years in the narrative, which feels a bit jarring after the steady control of the first two-thirds of the book. A character is reintroduced only to die two pages later, providing a narrative hook that would have taken a hundred pages to accomplish earlier. Ultimately, the novel centers around the ability of Gauri’s child to forgive her parents for their secrets and their mistakes, but also for the reader to consider their own extent of mercy when it comes to these characters.  Lahiri doesn’t provide an easy answer in this story with no clear heroes.  (Kelly Roark)