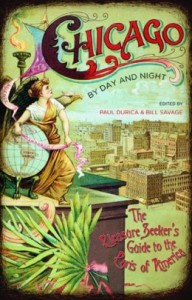 Chicago welcomed the 1893 World’s Columbian Exposition almost twenty years after the Great Fire, inviting thousands to flood the Second City. “Chicago by Day and Night: the Pleasure Seeker’s Guide to the Paris of America” was created to assist this influx of newcomers. With 300 pages and sixty-nine illustrations, the guide acted as a primer for exposition visitors and residents alike, detailing what one might need to know, from lodging accommodations to entertainment venues and revues, places of worship, gambling and vices, shopping centers, dining establishments and more.

The guide was recently revived by Northwestern University English Department lecturer Bill Savage and local writer and reenactment specialist Paul Durica. Savage was introduced to the text by a colleague at the Northwestern University Press where it was under consideration for reprinting. Savage enlisted Durica for his specialized knowledge on this Chicago time period.

The pair proceeded to do some digging. Due to its age, the guide was available in the public domain and a candidate for  republishing. To track down the guide’s author, they searched Library of Congress records to no avail. All that was listed was a name penciled in on the cover page, Harold Richard Vynne, a journalist and writer. “The publisher’s records no longer exist,” says Durica. “We have little information on how the book was put together.” The two reviewed the original text, making very few changes in order to preserve its style and tone. They wrote an introduction that explains the relevance of the text and their work. Any edits were “for the sake of clarity,” says Durica. “Alternate spellings of the same word, sometimes within the same chapter, have been retained. Everything else is original, including all of the photographs and illustrations.”

Each chapter begins with a narrative to draw in readers. The chapter on carousels, a celebrated pastime of the day, details an abundance of information: where they were located, the price to ride, and what to watch out for (patrons were usually young crowds prone to drinking and public disruptions).

Like a bible of Chicago history, “Chicago by Day and Night” is apparently the work of multiple authors as evidenced by the “many stylistic inconsistencies, the shifts in tone, and the breadth and depth of knowledge expressed,” says Durica. Even so, the structure and narrative attempt to remain consistent throughout.

Reading through the guide gives a fascinating visual of the early layout of Chicago. It presents city limits from Division to 16th Street, including only a few interesting landmarks from outlying neighborhoods. Like an 1890s not-for-tourists guide to Chicago, the guide would make a great primer for a walking tour of the city. Durica kept this in mind, pairing this project with his Pocket Guide to Hell Tour and Reenactments.

The next Pocket Guide tour will present a historical reenactment of Chicago commodities trading and the futures market titled the PIT. “Chicago by Day and Night” mentions the Board of Trade only having 2,000 members and as “the greatest opportunity for high gambling in the whole world.” The reenactment offers a glimpse into the lives of traders before modern methods were available.

“These stories help us understand who we are and where we came from, something that the literary arts, both fiction and nonfiction, enable us to do,” says Brenda Sawyer, President of Friends of the Blackstone Library and curator of the Despres Family Memorial Lecture Series. Sawyer invited the authors to lecture at the Blackstone Library later this month. “[They] are master storytellers of the lives of those orchestrating this showcase and the everyday man visiting the fair,” says Sawyer. (John Wawrzaszek)

The PIT, Sunday, October 20, 3pm, the Chicago Board of Trade, 141 West Jackson, as part of the Chicago Architecture Foundation’s Open House Chicago event.

“Chicago by Day and Night: The Pleasure Seeker’s Guide to the Paris of America”
By Bill Savage, Paul Durica
Northwestern University Press, 304 pages, $16.95