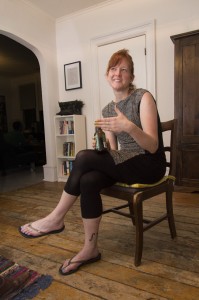 Among the dozens of editors and publishers suggested for 2013’s Lit 50 issue with whom I was not familiar  (and it’s the discovery of new people that I love most about working on that issue), one particular name appeared over and over: Mairead Case. One contributor claimed, “Wherever something literary is going on in Chicago, Mairead is there.” Still another contributor insisted, “This city’s lit scene moves on Mairead Case’s blood and sweat.” I had to meet her.

Mairead is an MFA-W candidate at the School of the Art Institute. She’s the Youth Services Assistant at the Poetry Foundation Library, and an editor-at-large for Yeti Publishing and featherproof. She writes regular columns for Bad At Sports and Bookslut. The scope of her involvement in independent publishing is astounding: she’s previously edited for The Journal of Ordinary Thought and Proximity, and copy edited for Semiotext(e) and  Nightboat. She co-authored a comic with David Lasky, “Soixante Neuf,” which was included in The Best American Comics 2011, and was a volunteer director at Louder Than a Bomb. Last summer, Mairead graduated from the Naropa Summer Writing Program in Boulder, Colorado, and is at work on a novel.

Since meeting Mairead last June, I’ve had the pleasure of being in her company on a handful of occasions. She is always serene and smiling; she inquires after my own writing and editing projects, recommends books and proffers encouragement. When I suggested a formal interview for a new project with Newcity, she warmly welcomed me and my photography partner, Shaun Crittenden, into the apartment in Pilsen she shares with her boyfriend Ed Crouse, even though they were still settling in after moving to the space only weeks prior. 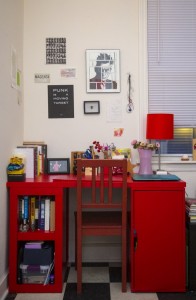 Let’s take a look at your bookshelves. What’s a favorite of yours?
This [“Master of Reality” by John Darnielle] is one of my favorite books ever. It’s from the Thirty-Three and a Third Series, about people’s favorite albums. This one’s fiction. It’s about this kid who really loves Black Sabbath. He goes into a mental institute, and this is his journal. He’s totally fine, but his parents caught him with pot and are like, “What do we do?” And he’s like, “I just want to listen to Black Sabbath!” It could be very sloppy, a Black Sabbath fan-kid thing, but it’s really, um…it’s beautiful. It’s very cleanly written.

And this [“Degrees of Gray” by Richard Hugo]. I really love Richard Hugo. There’s a place in Seattle called Hugo House, and I used to work there. It’s weird, he’s not somebody I’d expect myself to be into, but it’s really beautiful.

And also, “Krapp’s Last Tape” [by Samuel Beckett]. It’s about being with your past self. I wrote a big paper about him, so I have a lot of Beckett’s notes, and that picture over my desk is him, too. This book made me realize I need to do a better job of writing. He writes about a lot of things I care about very organically, and in a way that is outside of himself.

Have you always collected books? Have you always been a reader?
Yeah, I have been. My mom read to me, and I used to read “A Tree Grows In Brooklyn” every summer when I was a kid.

What are you reading right now?
I just finished reading that Renee Gladman book, “Toaf.” She worked forever and ever on this novel when she was younger, and she just realized it wasn’t going to work. So then she wrote a book about why it didn’t work. Which is shorter and really poignant and very cleanly written.

What book do you most often recommend to people?
Lately it’s “Stoner” by  John Williams. It’s a book about this guy who grew up on a farm and left home, went to school, and found out that he really loved English. His whole family is like, “What are you doing? You have to get back on the farm!” It’s about his whole life. It’s really beautiful. It has a Daisy Buchanan-like character, but she’s written much more fully— 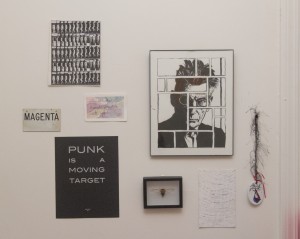 I always thought Daisy wasn’t given enough attention.
I know, right? And you want to root for her. But it’s like, “Ah, come on, Fitzgerald!”

A friend of mine recently told me about the first version of “The Great Gatsby.” It’s called “Trimalchio.” Maybe in that version Daisy’s a little more developed.
Well, Fitzgerald wasn’t that awesome to Zelda, either.

This is true. You recently took classes at Naropa. What was that atmosphere like?
It was a really wonderful and warm place. One of the biggest things I learned there—other than being introduced to a lot of writers I really love now—was the idea of a meditation practice. I never really thought it would be my kind of a thing, but it’s been really very helpful, you know, meditation as the idea of making yourself stay and sit and write for longer periods of time.

You’re lucky enough to have an office, a separate space in your apartment to go and do work. How did it come together?
I really like colors. This chair was the first thing I bought when I came out here. And then my desk, it’s just an IKEA desk, but I like it because you can move it, it’s in pieces. And I like the color. I like that it’s this bright red. It keeps me awake, keeps me present.


Do you do most of your work in this room?
It’s been really helpful to me to be able to be like, this is the space where I get things done [….] I also work at Atomix a lot. It’s nice because it’s not super close, so I’ll take the bus, and it’s like, a destination. 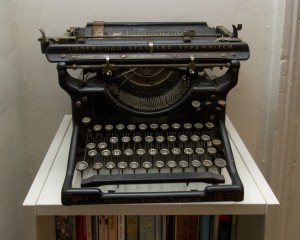 That’s an awesome typewriter. Is that an Underwood?
Yeah, my friend was leaving town and she let me have the typewriter [….] I didn’t know how heavy it would be, so getting it home was one of those things where you’re like, riding the bus with a typewriter.

How do ideas come to you? What inspires you?
I’m going through a lot of my old notebooks. I’ve always kept them. A lot of them are angsty and even embarrassing, now, but it’s good to read through them and use them as material [….] to find the things that have been germinating. They talked a lot at Naropa about reading as much as you can, and archiving that…I think a lot of my ideas come to me through reading. A lot of it, too, is just sitting down and not picking up your pen for awhile.

I also run, and it became, you know, if I can run everyday, why can’t I write everyday? Lately, I’ve given myself a word count. And I write in my notebook everyday, and take those notes back when I sit down to write again.

And what are you working on right now?
I’m writing a novel. I’m open to other projects, but I’m trying to do longer-term things now. I like that a novel asks the reader to stay for awhile, to sit with it.