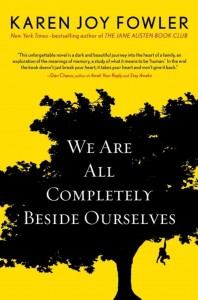 Despite the piles of books I encounter as a book reviewer and editor, I’m still often seduced by a book the old-fashioned way: a delightful cover design, a formidable number of pages, a titillating title. With Karen Joy Fowler’s “We Are All Completely Beside Ourselves,” it was the latter.

But a few chapters in, Fowler seduces with something else entirely, delivering a shock that quite literally changes the “truth” of the story, at least as the reader has come to understand it so far. It’s a trick, but it’s one Fowler deals deftly, and there’s nothing cheap about it. What follows is a story about how a young girl named Rosemary grieves the loss of her sister Fern, and how the memory of that loss has haunted her even into middle age. Rosemary tells the reader what she remembers, but because she was just five years old when Fern was lost, much of the novel pertains to memory and explores how what we remember is often just as important as what we choose to forget.

Karen Joy Fowler spoke with me recently from the road, while touring to promote  “We Are All Completely Beside Ourselves.”

Wikipedia makes it sound like you “decided” one day to begin publishing books, and did. I imagine it wasn’t such a simple process?

(Laughs) I had been one of those children who wrote a lot when I was growing up, and was much praised for it from my teachers and my parents. As a child, I did think I would be a writer. And then through some string of events that I can’t quite remember, I sort of lost track of that. I forgot that that was what I was going to be. When I went off to college, I started in political science. God knows what I thought I was going to do with that degree. As luck would have it, I started having kids, and I was a stay-at-home mom for awhile. So I was able to delay that question of what I was going to be when I grew up. When I turned thirty my kids were getting ready to go off to school, and I could see […] that they were going to leave me someday, and it would be best if I had a life when that happened. I remembered then that I had always wanted to be a writer, and I decided that that was what I would do. I asked my husband, who was hoping that I would get a job and lend some help to the family finances, to give me a year. I told him I would work hard and try for a year, and if nothing happened, then this was not meant to be. By the end of the year, of course, absolutely nothing had happened, except that I had worked hard all year, and I had figured out that for all the early promise people saw in me, I was not really a very good writer yet, and that I needed a lot of practice to get better[….] And it did, in fact, take me about five years, from the time that I decided to do it, to the time I published my very first short story. Five years in which I worked very, very hard.

During those five years, were you writing solitarily? Were you in workshops and classes?

I did a lot of workshops. When I started, there were a lot of public workshops in Davis, California. They were open to anybody, and didn’t really have an instructor—peer workshops of people who had made the same crazy decision I had made, to try to be writers. We met once a week, and you would bring in whatever you had written that week and read it out loud. I was in that workshop for nearly thirty years. I did summer workshops as well, I enrolled in a class at [Davis University], and I just wrote and wrote and wrote. I had always read and read and read, and I continued to do that as well.

Publishing young is almost discouraged by some—there’s the idea that in your twenties, you don’t yet know enough about yourself or the world to write about it. As someone who started writing young, but published later in life, what do you think of that?

I would say that if I had published in my twenties, it might have been a mistake, but that doesn’t mean it’s a mistake for everybody. A lot of people come to writing earlier, and mature more quickly than I did….or have something more interesting to say than I did.  It is true that when I decided to be a writer at thirty it seemed that I was very, very old. But I’m sixty-three now, so thirty doesn’t seem like such a delayed beginning anymore.

Rosemary, the protagonist, often directly addresses the reader, a style that lends a great deal of 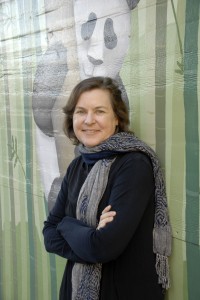 authority to the narration. It made me completely trust her—so much so that later in the book, when Rosemary learns she’s mistakenly remembered some very key moments of her past, I still find her trustworthy.  Is this intentional?

It’d been quite awhile since I’d done a first-person novel, so it took me awhile to get comfortable with it again. Having chosen that, I thought I should use its full powers. I conceive of the book as Rosemary telling her story with an agenda, with a purpose. She is very conscious of the fact that someone is reading it, and she’s trying to control that experience so she can make the points she needs to make.

I want the reader to trust Rosemary. She’s not entirely reliable, but she’s trying to be honest. She’s not pretending to be more certain than she is.

A lot of the book pertains to the science of memory—how we remember, how we forget and why.  It’s clear you’re fascinated by memory.

I’m fascinated by memory,  yes—partly because I was paying attention [to research] in the seventies and eighties when all of the studies were released surrounding recovered memories [….] and even further studies that suggested our memories are unreliable. And that was a shift from the way I grew up, thinking that memory was a pretty reliable guide to what had happened. But it’s really not. Our accounts of events  are very rarely accurate. My narrator is recounting events that happened when she was five years old. It’s not plausible that her memories would be sound and solid and utterly trustworthy.

How did you conduct research for this book?

I do a lot of research for all of my books. A number of them have been historicals, so I’m researching events and places that no longer exist. In one way or another, I’m always involved in research when I’m writing a novel—which is not a complaint. It’s one of the parts that I really love about the process. It was interesting to me that I had a kind of opposite research experience to my usual one with this book. Usually I start researching the book long before I start doing the writing. I’m usually reading very widely—looking at the period I’m interested in and reading whatever comes across my desk, whatever I can lay my hands on. As the book begins to come into view, begins to fortify, my research experience gets more and more focused. I’m looking more for particular things, not reading so widely.

With this book, I knew I would be dealing with the issue of experimenting with chimps that were home-raised. So I began reading books about people who were involved in those experiments, and there are quite a number of them. I read as many of those books as I could find about particular cases. Then I widened [my focus] to primate behavior. And then I thought, why limit it to the primates? I took an animal theory class. I began to research animal cognition, in a general way. It’s a fast-moving body of research right now, and a really fascinating one.  I was very far afield in wonderful ways, looking at crows, elephants, horses, Border Collies, dolphins.

What are you reading right now?

Right now, I’m reading a novel that came out several years ago called “Go With Me” by Castle Freeman. It’s very, very good. I just read a new novel coming out called “Queen Sugar,” by Natalie Baszile. I’m about to begin reading “A Beautiful Truth,” another novel coming out soon, by Colin McAdam.  It’s also about chimps. From what I hear, he’s written some chapters from the chimp’s point of view. I think that will be fascinating.

And what can we expect next from you?

I’m vaguely working on something else. I’m in that period where I’m reading and haven’t really found a story. I’ve written a couple of short stories…and I’ve developed a fascination with Edwin Booth, who was the brother of John Wilkes Booth, Lincoln’s assassin. Edwin was a thespian and a great Shakespearean actor. Maybe I’ll try to do some sort of Shakespeare-infused fantasy? That’s what I’m imagining.