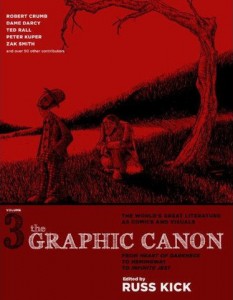 There is a Kathy Acker comic now.

With this third entry in Russ Kick’s acclaimed series of anthologies adapting works of literature into illustrated form, the most notorious work by America’s most controversial postmodern author, “Blood and Guts in High School,” exists in comics form.

I can stop writing reviews now. I have now everything I ever wanted out of Western literary culture.

All of which is what makes the Graphic Canon series so interesting as a concept. Adapting prose works into comics is nothing new, going back to the long-running “Classics Illustrated,” which for decades brought works of classical literature into a cheap and accessible format before closing down in 1971. It would briefly resurface in the early nineties with noteworthy artists such as Bill Sienkiewicz, P. Craig Russell, Jill Thompson and others, reflecting the tones and themes of the original stories with comparable artistic style and motifs.

It’s this latter approach with which the Graphic Canon series has taken flight. Rather than strictly sticking to direct adaptations of the stories, the series instead leaves substantial wiggle room for the artists in terms of their definition of “adaptation.” The third volume focuses on twentieth-century literature, ranging from James Joyce’s “Araby” to David Foster Wallace’s “Infinite Jest.” Kick has put together a fairly diverse selection of writers, keeping it from becoming a celebratory parade of dead white heterosexual American males. Langston Hughes! Zora Neale Hurston! Gabriela Mistral!

The artists selected to bring the “cover versions” to life are as varied in their style as they are in their approach. A number of short stories get the full adaptation here, such as Ernest Hemingway’s “Living on $1,000 a Year in Paris,” adapted by Steve Rolston, while some of the longer pieces are featured as excerpts or illustrated tributes, as with Molly Crabapple’s two-page-wide portrait of the titular character in Colette’s “Cheri.” The cartoonist Mardou takes a creative approach to adapting the diaries of Anaïs Nin, and gives us a rather good comic biography of the author. With Rilke’s “Letters to a Young Poet,” James Uhler stretches the parameters of “Graphic” the furthest, using typographic design to reframe the very words of two of the letters into a visual composition that, frankly, would be an enticing way to read the whole exchange. (I know, I know—do we really need another edition of “Letters?” If Uhler is designing it, yes.) Chandra Free gets to show off her versatility in a section from Eliot’s “The Waste Land” and Julia Gfrörer gives us a haunting and silent reimagining of Umberto Eco’s “Foucault’s Pendulum.”

Are these all direct narrative adaptations? Certainly not, and anyone hoping to use this as a visual Cliff’s Notes to pass a Twentieth Century Lit class is going to find themselves sorely out of luck. But for fans of literature and comic art, this is a fantastic compilation. (Greg Baldino)