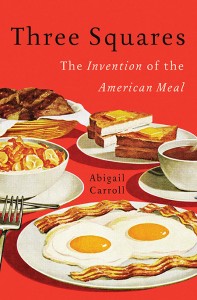 Americans and food are inextricably linked. Our weights, shapes and relative fitness have become a cultural trope tied to food traditions and brands that have left our shores and taken up root in nearly every country in the world. Foreigners scrutinize our eating habits nearly as much as we do, sometimes to learn from them, sometimes to spurn them, sometimes as a convenient way to mock Americans and Western cultural practices overall. Our relationship to food seems to have moved from one of necessary sustenance to fetishized status symbol. We talk about food constantly, watch it on our television sets, write about it in the pages of our newspaper and on our blogs.

Abigail Carroll began the research project that became “Three Squares: The Invention of the American Meal” by focusing on snacking. What she discovered was that the history of snacking in America was linked to the cultural traditions of mealtime. What emerges from this project is a finely crafted, often surprising and detailed history of the American meal, and how time, tradition and innovation have created the food-obsessed country we inhabit today.

Carroll’s work is exhaustively researched and general historical timelines are fleshed out by firsthand accounts from Americans, from travel journals and letters home from the colonial era to interviews with twenty-first-century urban Americans on their familial dining habits. Carroll begins with the colonists for one very important reason: to emphasize that what we know as the traditional three meals a day—breakfast, lunch and dinner—are far from traditional and, in the case of lunch, not even that old. Colonists and pre-Industrial Revolution Americans ate according to the agrarian organization of a day with breakfast very early, dinner around noon and supper in the evening. Most importantly, those meals were taken as they were convenient—the notion that meals were occasions for familial togetherness did not exist until the Industrial Revolution.

Much like its role in the rest of American culture, the Industrial Revolution marks the shift from the sustenance-based and fairly disorganized form of meal-taking colonists used to the three-a-day system with which modern Americans are so familiar. Factories upended agrarian scheduling and took multiple family members away from the home, making dinner (now an evening meal) an important site for family gathering. It also meant a midday meal had to be provided outside the home and so, in one of Carroll’s most surprising and fun revelations, lunch was invented. Yes: invented. The only drawback to this examination is that it feels at times like the book is stuck at the turn of the twentieth century.

Carroll also exhaustively documents Americans’ longstanding inability to reign in their unhealthy behavior, focusing often on the epidemics of dyspepsia (chronic indigestion) that has plagued America at every stage of our history. Extravagant multi-course meals made fashionable by Europeans in the nineteenth century, too-heavy breakfasts suitable for farmers but not factory workers in the early twentieth century, contaminated or adulterated food at every stage of our national development—it is clear that food’s negative impacts on the body have been as formative for shaping American eating traditions as its positive ones. That medical angle also adds a new facet to the concurrent history of American food industrialization and processing that Carroll traces in “Three Squares.” So much of the current narrative surrounding processed foods focuses on the dangers of consuming chemicals and preservatives that it is easy to forget that the invention of much processing, preserving and packaging techniques helped to eliminate public health threats and food contamination.

“Three Squares” reads as slightly uneven; Carroll spends most of the book carefully detailing seventeenth-, eighteenth-, and nineteenth-century American meal practices, so when she finally gets to the huge jumps in technology and innovation that characterize the twentieth century—and their attendant effect on the practice of the American meal—it feels rushed. Changes in meal practices occurring after 1970 are dealt with in a mere twenty-two pages. Those older histories feel bogged down in intricacies, especially in comparison to the obvious delight on display in the fantastic chapter about snacking. Finally, the gestures toward this history’s implications for the future of the American meal feel perfunctory. But overall, “Three Squares” is such an important and fascinating cultural history that it’s almost hard to believe it hasn’t already been written. As “Three Squares” reveals, food is at the heart of how Americans have built an identity and defined nationalism and patriotism, and it’s high time we started devoting time to understanding that history if we’re going to shape how we eat in the future.  (Sara Tenenbaum)