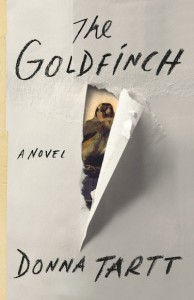 Donna Tartt inspires the kind of loyalty in her readers that survives the approximate ten-year span between her books. This long-awaited third book, “The Goldfinch, ” will provide a salivating public with almost 800 pages to tide them over for the next decade. It begins in Amsterdam, after some trauma has rocked Theo Decker. Resist the urge to Google-translate the few Dutch phrases and enjoy the mystery of what might have happened. Amidst his anxiety, Theo casts his mind back to a winter day with his mother in New York, the day she died. In an event that is never fully explained, he comes to possess a masterwork by a Dutch artist of little renown, Fabritius. The small, lovely painting features a goldfinch, which Theo hides. By complete coincidence, this real-life painting is currently showing at the Frick. Tartt fans, watch your worlds collide if you have an upcoming trip to Manhattan.

The first person that pops into his mind when social services arrives after his mother’s death is a not-so-close friend, Andy Barbour. The distant, wealthy family invites Theo into their home, but never provides the love and comfort he knew before. Eventually his estranged father appears and moves the boy to Vegas. The father is a gambler and an alcoholic, clearly after any money that might be coming their way. Theo is left alone in a huge, empty house in an abandoned subdivision, just down the street from a Russian kid whose father has left him in a similar situation. The Vegas portion of the book steers the book into the arena of economic unscrupulousness—as if the mortgage crisis and the fall of the economy boils down to inattentive fathers and boys run amok, doing drugs, ditching school, and hiding Dutch masterpieces in the bedrooms. His Russian friend, Boris, is one of the more entertaining aspects of “The Goldfinch.” Smart, funny, and devious, it’s Boris who provides Theo with the sense of family he’s been missing. Wise beyond his years and just a bit of a cliché, he encourages Theo to build his relationship with his father. “He broke your mother’s heart,” said Boris decisively. “When he left her. But you need to forgive him. All that’s in the past now.” Not surprisingly, Boris’ father is even more abusive than Theo’s abandoning, neglectful one. The relationship between the boys contains something of that rare, magical quality between two friends, particularly two boys, whose closeness transcends brotherhood into a delicate area that neither boy can fully express. They love each other, simply put, and in the solitary, forgotten suburb, they create their own family.

Tartt’s unhurried story moves from New York to Vegas and slowly back to New York again. Theo leaves Vegas and moves in with another near-stranger in Manhattan—a furniture dealer who teaches Theo the trade. Still afraid to tell anyone about his secret possession of the painting, Theo behaves more and more recklessly, addicted to pills and threatening his friend’s furniture business with shady deals. More than halfway through, the plot suddenly picks up with some derring-do involving art theft and thuggery. This abrupt turn feels disjointed—wholly separate from the character-driven aspect of the first two-thirds of the book. The novel grows more and more introspective, with characters raising questions about the nature of humanity, the possibility of “goodness,” the soul-influencing capability of art, whereby even his abusive, abandoning, alcoholic, gambling-addicted father emerges as a sage. “Sometimes you have to lose to win,” a phrase his father rather deliriously repeated, strikes Theo like a fundamental principle. Boris happens on this philosophy too. “Where does it ever say, anywhere, that only bad can come from bad actions? Maybe sometimes—the wrong way is the right way? You can take the wrong path and it still comes out where you want to be? Or, spin it another way, sometimes you can do everything wrong and it still turns out to be right?” The same might be said for this book—although meandering and improbable, it’s still compelling and thoughtful. Tartt hits upon some truths in “The Goldfinch,” and allows herself the space to explore them. (Kelly Roark)